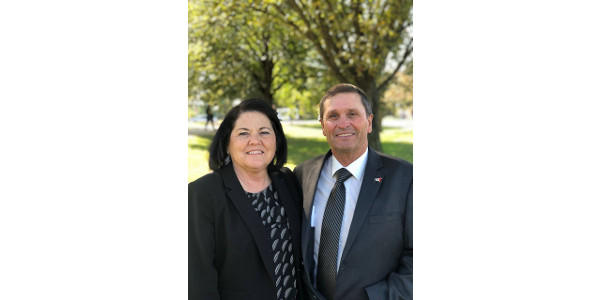 AMES, Iowa — Iowa Cattlemen’s Association board member, Bob Noble, and ICA’s Government and Regulatory Affairs Manager, JanLee Rowlett recently gave comments during a two-day public meeting on lab-grown fake meat. The first day of the joint USDA/FDA meeting in Washington, DC focused on regulations related to alternative proteins, while the second day was aimed at discussing labeling of such products.

“We want to ensure that reasonable, science-based standards are the basis for the regulatory system of all meat food products, regardless of how they are produced,” said Noble in his comments. “The Iowa Cattlemen’s Association stands behind the National Cattlemen’s Beef Association’s call for USDA oversight of cell-cultured alternative protein products.”

Noble, a cattle producer from Mitchell County, has a master’s degree in meat science from Oklahoma State University, and experience in the processing sector.

The regulation of “fake meat” has emerged as a priority for the Iowa Cattlemen’s Association over the past few months, as technological advances have decreased the cost to produce lab-grown products, and major meat processing companies such as Tyson and Cargill have invested in the development of these products.

The Iowa Cattlemen’s Association helped bring this issue to the forefront by introducing policy at NCBA related to alternative proteins. The association’s main goals are are two-fold:

2) maintain consumer confidence and protect the beef industry from disparaging claims by alternative protein companies such as “clean meat” which imply that beef raised by Iowa farm families is unsafe or dirty.

ICA supports the oversight of these products by the USDA rather than FDA due to FDA’s failure to enforce labeling rules for plant-based products claiming to be milk.

Noble serves as the District 5 director for the Iowa Cattlemen’s Association and is a voting delegate for ICA at NCBA conventions. “Cattle producers in Iowa and across the country take their role in producing safe and nutritious beef for consumers very seriously. From the pasture, to the processor, to the plate, our industry has made investments, and advancements, at every stage of production to ensure the highest level of integrity of the beef we produce,” he said during his comments.

On the second day, Rowlett provided her comments, saying, “Fair and accurate labeling of meat food products, no matter how they are produced, means the same labeling standards across the board. ‘Beef’ and other terms consumers associate with meat products made from livestock raised by farmers and ranchers should be used to describe only those products, not those produced through cell-cultured technology.”

“These objectives can be achieved only under the primary jurisdiction of USDA’s FSIS, which will ensure a sound scientific basis of labeling and approval of these labels before products are offered on the market. We believe the pre-approval of these labels is absolutely critical to preserving the integrity of all meat offered for sale to American families,” she concluded.

Other speakers during the two-day meeting included livestock and meat industry representatives as well as animal rights activists and companies who produce alternative proteins. “ICA is really proud to have a leader like Bob sharing the perspective of Iowa’s cattle producers at this national meeting,” said Rowlett. “There are still a lot of unanswered questions about alternative protein products, but we will continue to make sure that ICA members are represented in discussions surrounding the regulation and labeling of these products.”

ICA’s other policy priorities, including international trade, the Electronic Logging Device mandate, and environmental regulations can be found at www.iacattlemen.org.