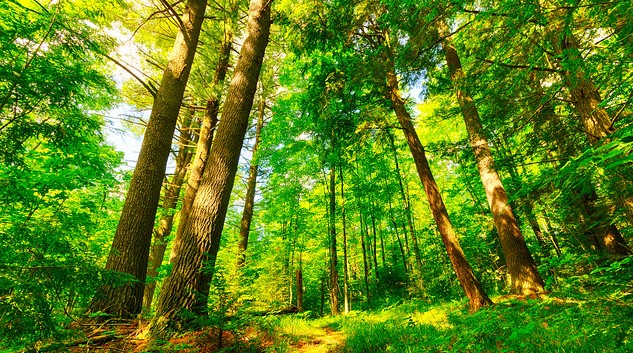 In North America, forests account for an estimated 76 percent of carbon sequestration, or removal from the atmosphere and storage globally. (Joshua Mayer, Flickr/Creative Commons)

NEWTOWN SQUARE, Pa. — In addition to cleaning the air and water, forests hold a tremendous amount of sequestered carbon. When trees die and then decay on the forest floor, that carbon is released into the atmosphere, a phenomenon that is one of the drivers of climate change. A first-of-its-kind study by a team that included the United States Department of Agriculture’s Forest Service and Purdue University scientists finds that non-native invasive insects and diseases are reducing the amount of carbon stored in trees across the United States.

The study by Forest Service scientists Randall Morin, Chris Oswalt and Andrew Liebhold with lead author Songlin Fei of Purdue University used data from 92,978 field plots sampled by the Forest Service’s Forest Inventory and Analysis (FIA) program in is the first attempt to comprehensively quantify the cumulative losses of trees following invasion by all species of non-native insects and diseases at a national scale.

The study, “Biomass losses resulting from insect and disease invasions in USA forests,” is available at: https://www.nrs.fs.fed.us/pubs/58371.

In North America, forests account for an estimated 76 percent of carbon sequestration, or removal from the atmosphere and storage globally. “The key impact of the tree-killing alien insects and diseases is that they are greatly increasing the rate at which trees die on average,” Liebhold said. “This transfers carbon stored in live trees to dead material and much of this carbon will likely return to the atmosphere.”

Scientists emphasized that the study does not suggest that insect-killed trees become instant sources of carbon emissions. “Carbon transfers from living trees and plants to dead organic matter, and the release of carbon occurs gradually with decomposition of organic matter,” Fei said. “However, the total amount of carbon in these dead materials are substantial, which is comparable to carbon emissions from 4.4 million cars or nearly one-fifth of all wildfires in the United States annually.”

More than 430 non-native insects and diseases have found their way to U.S. forests. Most of these species have little known effects on forests, however 83 have caused noticeable damage. In their study, Fei and Forest Service scientists examined the impacts of these 83 known damaging non-native forest insect and disease species and estimated the rate at which live tree biomass has been killed by the 15 species that have had the greatest impacts on forests. Insects such as the emerald ash borer, gypsy moth, and hemlock woolly adelgid and diseases including Dutch elm disease, beech bark disease and laurel wilt disease are among the 15 most damaging non-native species.

As these insects and diseases continue to spread and tree mortality increases, the toll on forested landscapes and associated carbon storage will continue; the study suggests that 41 percent of the total live forest biomass remaining in the conterminous United States is threatened.

For more than 80 years, FIA has been collecting data that informs forest management. Historically the large dataset has been used by states and private groups to monitor forest area, health, and conditions. Recent collaborations have demonstrated novel, interdisciplinary applications. “This study demonstrates the power of the FIA data to quantify the impact that non-native forest pests are having in the United States,” Morin said.