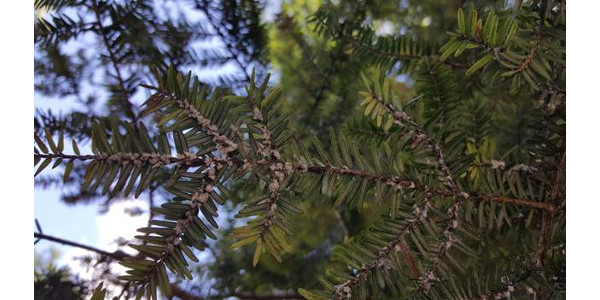 Hemlock Wooly Adelgid, an insect that can kill hemlock trees, latches onto the base of needles and sucks out nutrients and sugars. Once in place, the adult creates a fuzzy, white, “wooly” coat. (Courtesy of Van Buren Conservation District)

PAW PAW, Mich. — It’s not news that Michigan’s forests are dealing with a slew of invasive species. From garlic mustard to Japanese barberry, a number of plants originally from other places have been wreaking havoc in Michigan for decades. As invasive species spread, the plants and animals we’re used to seeing, including white-tail deer and the forests they depend on, are hurt. From the trees that provide winter shelter to food plants, invasive species don’t make good habitat for Michigan’s wildlife.

Deer species, like most animals, prefer to eat native species rather than invaders. Unfortunately, as invasive shrubs such as Japanese barberry and multiflora rose start to take over, deer have a harder time finding the plants they like to eat. Plants like garlic mustard or a new invader called Japanese stiltgrass, which was found in Southwest Michigan for the first time just last month, are both low-growing plants that can form dense mats, pushing out and smothering the tender growth that deer prefer.
Densely growing invasive shrubs can also block larger animals from moving through the forest, both deer and hunter alike. Michigan’s forests typically don’t have very dense growth underneath canopy trees, but non-native plants can quickly take over these low-light areas. Invasive shrubs can also hurt nest success for some songbirds, including Robins. American robins that nested in invasive honeysuckle were more likely to have their eggs or chicks eaten by predators like racoons.

However, some of the newest and most dangerous threats to Michigan’s forests are the smallest ones. New forests pests are being found in our area for the first time, and could be a major threat to deer habitat. Biggest on the horizon is a tiny insect called a Hemlock Wooly Adelgid (or HWA), which is north near Holland and Grand Haven. HWA latches onto the base of hemlock needles, sucking out the nutrients and sugars the tree needs.

“Deer use hemlock forests in the winter, especially when we get lots of snow. The dense needles of hemlock mean that less snow reaches the ground, so that deer can run more easily from predators. If we lose our hemlocks, our herds will feel it.” Says Eleanor Serocki, Coordinator for the SWxSW Corner CISMA.

The best way to protect our forests? “Clean off boots or other gear when you go out. It’s way easier to keep an invasive species out in the first place than it is to try and get rid of it.” Serocki also encourages individuals to report any sightings of invasive species to misin.msu.edu, or directly to the CISMA by either calling 269-657-4030 or email eleanor.serocki@macd.org.

The Southwest X Southwest Corner Collaborative Invasive Species Management Area (CISMA) is a grant funded program to manage invasive species in Berrien, Cass, and Van Buren counties. With funding from the Michigan Invasive Species Grant Program, the CISMA aims to help landowners and stakeholders in the Southwest Michigan area manage invasive species. If you have any questions on Invasive species, please contact the CISMA at (269)-657-4030 or email photos and address or latitude/longitude to: eleanor.serocki@macd.org.