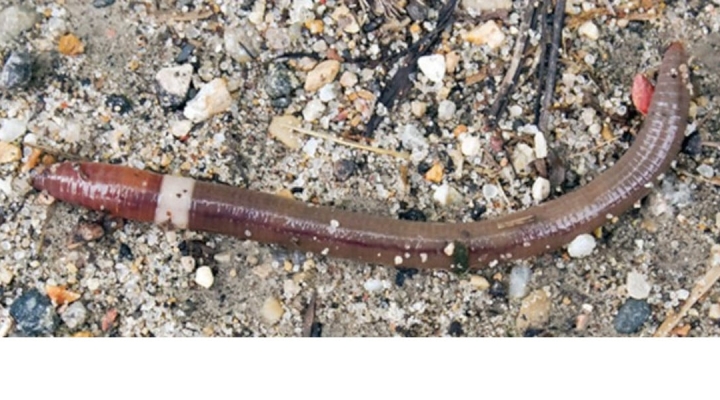 This mature jumping worm can be identified by its characteristic smooth, often milky white clitellum (band near the head of the worm). (Photo Credit: Susan Day/ UW- Madison Arboretum)

MADISON CO., N.Y. — Nearly all earthworms in the Northeast today are non-native, and these European and Asian invasives are altering the soil structure and chemistry of our forests. They consume the critical layer of organic matter that supplies vital nutrients for plants and provides food, protection and habitat for wildlife. However, jumping worms are especially concerning. These Asian exotics devour organic matter more rapidly than their European counterparts, stripping the forest of the layer critical for seedlings and wildflowers. Jumping worms grow twice as fast, reproduce more quickly and can infest soils at high densities. In areas of heavy infestation, native plants, soil invertebrates, salamanders, birds and other animals may decline. Jumping worms can severely damage roots of plants in nurseries, gardens, forests and turf. They, along with other invasive worms, can also help spread invasive plant species by disturbing the soil. Jumping worms are widespread across much of the Northeast, Southeast and Midwestern US, and the first records date to the late 19th century. Unfortunately, relatively little is known about them compared to European earthworms.

Where to find them?

They can be found on the soil surface and in the leaf litter, making them easy to find. They can live anywhere from urban parks and suburban backyards, to rural forests. You are very likely to find them in compost piles and along roads.

Many worm species can reproduce without mating, which means a single worm can start a whole population. Because jumping worms are more aggressive and their populations can grow faster than the common European species, they may outcompete existing worm populations. Adults die prior to winter, but their young survive harsh New York winters in tiny, resilient cocoons. Cocoons are very small and dirt colored, so they are nearly impossible to spot with your own eyes. Cocoons can be spread easily in potted plants, and on landscaping equipment, mulch, tire treads and even hiking boots.

What to look for:

Worms are smooth, glossy gray or brown; 1.5 to 8 inches long

We currently have no viable earthworm control methods, but we CAN prevent their spread!

If you see jumping worms, please report your sightings to www.nyimapinvasives.org