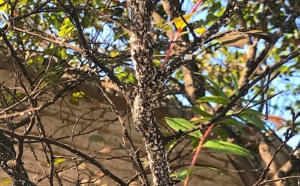 An invasive insect pest of the widely used ornamental plant crapemyrtle has been found for the first time in South Carolina. (photo provided by Clemson University Public Service and Agriculture)

CLEMSON, S.C. — An invasive insect pest of the widely used ornamental plant crapemyrtle has been found for the first time in South Carolina.

Crapemyrtle Bark Scale has been positively identified in locations throughout metro Columbia, said Steven Long, who leads the plant protection division of the Department of Plant Industry (DPI), a regulatory unit housed at Clemson University.

The pest is regulated by the state in the nursery trade, but not in private landscapes. However, it can cause significant damage to crapemyrtles, often requiring treatment to control the damage and mitigate the spread.

The invasive bug, a native of Asia, was first confirmed in the United States near Dallas, Texas, in 2004. It has since spread to a dozen states, most likely through the movement of plant material, Long said.

Crapemyrtle Bark Scale (Acanthococcus lagerstroemiae) is one of thousands of species of scale insects. It is a parasite that feeds on the plant’s sap and leaves behind a sugary solution that appears as white or gray waxy crusts on stems, twigs and trunks, but rarely on foliage. The secretion eventually will turn black and in heavy infestations can coat leaves, stems and bark of the tree.

Although crapemyrtles rarely die as a result of the infestation, the insects can damage the strength and the appearance of the tree.

Long said landowners should be wary and try to avoid the pest. “It is critical to make sanitation a priority when dealing with plants or plant material like mulch,” he said. “Your county Extension agent will have recommendations that fit specific locations and a conversation with you landscaper or nursery staff will be important if you suspect an infestation.”

The pest can travel on contaminated pruning tools. Mulch is a possible source since the scale can easily survive the chipping process. In heavily infested areas, alternatives to crapemyrtle should be considered.

Joey Williamson, the horticulture agent who wrote the fact sheet, reminds plant owners that if they don’t want to apply an insecticide, there’s another option for the resilient crapemyrtle.

“If the plant is highly infested, cut the crape myrtle off flush with the ground. Promptly burn the removed trunk and limbs, or cut up and place in garbage bags for trash pickup. Do not place on curb for regular brush pickup,” Williamson writes. “Once cut, the stumps will send up sprouts very quickly … ” and with proper pruning and maintenance “within three years, the crapemyrtle will again be a beautiful flowering plant.”

Everything you need to know about S.C. State Fair