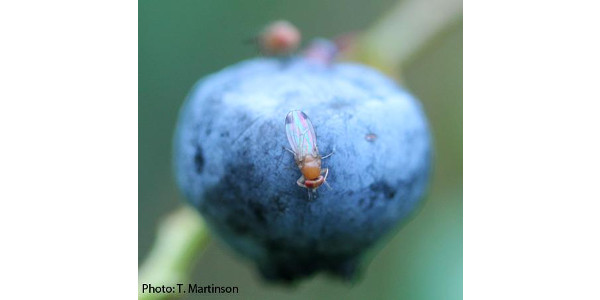 MADISON, Wis. (AP) — Wisconsin researchers are trying to learn more about an invasive fruit fly that has been threatening berry crops in the state since 2010.

University of Wisconsin fruit crop entomologist Christelle Guédot told Wisconsin Public Radio (http://bit.ly/2sLfQEH ) that researchers started trying to pinpoint when and where the spotted wing drosophila is most active within plants last summer.

The research could help growers get a better idea of when to spray insecticides, she said They’re also examining if temperature and humidity play a role in the insects’ distribution.

Eric Carlson owns Blue Vista Farm in Bayfield. He said he has to spray his crops every week to control the pests, which has increased his production costs. The organic insecticide costs about $450 per quart, Carlson said. He uses between four and six ounces per acre.

“There aren’t enough people coming, and we’re not selling enough fruit to justify this expense,” he said. “All that fruit that’s out in the field is inedible in a way because it’s all going to get infected.”

Tiffany Chadwick is the executive director of the Wisconsin Berry Growers Association. She said some of their members have contributed money toward research in hopes of identifying how to control the damage.

“Until that research is being done, a number of our growers have decided to just stop producing raspberries at this time because it’s just been too consuming of their time to try to deal with the issue,” Chadwick said.

The U.S. Department of Agriculture awarded about $2 million to Wisconsin, Georgia, Oregon, Michigan and Florida to research organic management strategies for the invasive bug. As part of that project, Wisconsin received around $40,000 to test different combinations of baits to attract the pests. The most successful combination has been sugar, yeast and commercial lures, Guédot said.

Results of the study should be available by the end of the year.

What is the Wisconsin state soil?
December 2, 2021