Home / Michigan / Invasive balsam woolly adelgid confirmed in Kent County
A new user experience is coming! We'll be asking you to login to your Morning Ag Clips account March 1st to access these new features.
We can't wait to share them with you! Read more here. 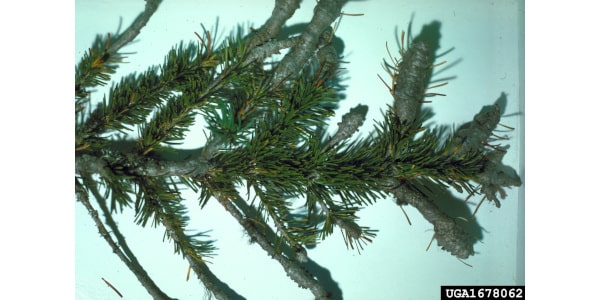 “It’s not known how BWA may have gotten to Michigan or how long it’s been here, but it’s plausible it was on infested nursery stock,” said McDowell. “Arborists, tree experts and the public are our extra set of eyes with invasive species. With August being National Tree Check month, this is another critical reminder to look for irregularities with your trees and to not move firewood.”

Balsam woolly adelgid is a tiny, sap-feeding insect that attacks true fir trees, including balsam, Fraser and concolor (white) fir. BWA has been on Michigan’s Invasive Species Watch List for years because repeated attacks from the pest weaken trees, cause twig gouting, kill branches and, over the course of many years, cause trees to decline or die.  Although new to Michigan, BWA has infested fir trees in portions of the United States for over 100 years likely arriving on infested nursery stock from Europe.

Symptoms of BWA infestation include:

“Thanks to an alert arborist, MDARD was able to collect samples and confirm that several Fraser fir trees on a single residential property were infested with Balsam woolly adelgid,” said Mike Philip, MDARD’s Pesticide and Plant Pest Management Division Director. “Early detection and response are crucial to our efforts to protect the state’s natural resources. We don’t know how long it’s been here or if it’s spread; however, PPPM and its partner agencies will begin survey work to try and determine the extent of the infestation.”

“This invasive insect is a threat to the nearly 1.9 billion balsam fir trees in Michigan’s forests,” said Rob Miller, PPPM’s invasive species prevention and response specialist. “And, as the third largest Christmas tree-growing state in the country, Michigan produces nearly 13.5 million fir trees each year, which are susceptible to balsam woolly adelgid.”

Although not native to Michigan, Fraser and concolor fir trees are often planted on home landscapes. Balsam fir is native to the Upper Peninsula and Northern Lower Peninsula but also found throughout the state in residential and park settings.

“Human movement is one of the most common ways non-native species spread. When travelling, remember to leave firewood at home and buy it locally at your destination,” Miller added. “Balsam woolly adelgid cannot travel far on its own but may be carried by wind, wildlife or infested wood.”

If you notice these symptoms, take photos, note the location and report it to the Midwest Invasive Species Information Network or MDARD at MDA-Info@Michigan.gov or call 800-292-3939. For more information on balsam woolly adelgid and other invasive species in Michigan, and to find out what you can do to help prevent them, visit Michigan.gov/Invasives.

Have a chat about safety

Virtual Breakfast on Aug. 26 on getting the most out of manure