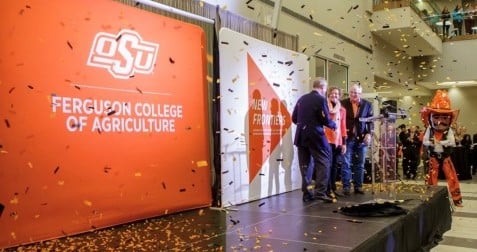 STILLWATER, Okla. — Oklahoma State University and alumni Kayleen and Larry Ferguson announced a $50 million gift from the Ferguson Family Foundation that will transform the College of Agricultural Sciences and Natural Resources in a variety of ways, including a new name. Pending approval next week from the Oklahoma A&M Board of Regents, the college will be renamed the Ferguson College of Agriculture in recognition of the gift, which is among the largest in OSU’s nearly 130-year history.

Through the New Frontiers campaign, the university seeks to raise $50 million in private support for the planned $100 million teaching and research facility, with construction beginning in the spring of 2021.

Oklahoma State University President Burns Hargis said the Ferguson Family Foundation’s gift will have far-reaching benefits for all of OSU in addition to the multibillion-dollar agricultural and natural resource economies of Oklahoma and the region.

“Not only will we have the right tools in place with this wonderful new building, but the Fergusons’ gift ensures we can always recruit and support the brightest minds in the world. That impacts the way we teach, the way we research and how we share that information with others through OSU Extension who will benefit from our findings,” Hargis said. “The Ferguson College of Agriculture will be a destination for researchers, professors and students. One can only imagine what discoveries will be made and how the world will change because of the work being done in OSU Agriculture.”

Dr. Thomas G. Coon, OSU’s vice president for agricultural programs and dean of the renamed college, said the historic gift’s programmatic support and the cutting-edge facility will allow the Ferguson College of Agriculture to unequivocally emerge as a leader in agricultural and natural resource programs across the country and around the world.

“This project will change and modernize our research and the way we teach scientific subjects. It all goes back to the premise of being a modern, land-grant institution,” Coon said. “Research has the promise to change the way we grow food and care for the natural environment we rely on. It can transform Oklahoma’s economy, fostering innovation that will feed a growing world.”

The governor said OSU sets the pace for research in Oklahoma, noting it is included as a top-tier research university in the Carnegie Classifications.

“The agriculture industry in our state also employs over 300,000 Oklahomans that are truly feeding and fueling the world,” he said. “The success and rich history of agriculture in our state is due in large part to this institution and what it means to our state … I commend the university for the innovation, for the teaching, the research and the extension efforts that have been critical to the growth of our state.”

“An ag degree from Oklahoma State is a golden ticket to career opportunities and preparing students to be leaders and change makers in their communities,” she said. “… We have something very special here at Oklahoma State in our ag program. We expect success and turn out top-tier students. We have some of the best students in the world who will go out and change the face of agriculture but also the business world.”

Kayleen and Larry Ferguson said their faith, belief in education and love for the OSU family inspired their giving.

Both Fergusons credit Oklahoma State as an impetus for much of the success they experienced throughout their lives.

“I would never have become CEO without coming to Oklahoma State and going through the program here,” Larry said. “Kay and I believe education is the way to solve the economic problems of our country. This gift is about more than just education. This is a way of helping feed the world. It is our sincerest hope that our fellow alumni will invest in the future of OSU Agriculture and join us in the New Frontiers campaign.”

The Fergusons have already begun transforming agricultural programs at OSU through their contributions to the Ferguson Family Dairy Center. The couple, who met as students in 1975, announced the lead gift for that project in 2015 and celebrated its grand opening in 2017. Since then, OSU has attracted students from across the country who want to be a part of the dairy program and live in Helms Hall. In total, Kayleen and Larry Ferguson have given nearly $55 million to Oklahoma State through the Ferguson Family Foundation.

Larry is the retired president and CEO of Schreiber Foods, the world’s largest employee-owned dairy company, and Kayleen is a retired educator who primarily taught English. The couple live in Hot Springs, Arkansas, and have three grown sons and seven grandchildren.

Through the Ferguson Family Foundation, they have supported many initiatives in their communities and churches. At OSU, the Fergusons have been active in their support of athletics and the department of animal and food sciences, where Larry earned his bachelor’s degree in 1975. Larry was named the OSU Animal Science Graduate of Distinction in 2002 and was recognized as a Distinguished Alumnus of the College of Agricultural Sciences and Natural Resources in 2016. The OSU Alumni Association recognized both Fergusons as Distinguished Alumni in 2017.

About the New Frontiers fundraising campaign

Through the New Frontiers campaign, the university seeks to raise $50 million in private support for the planned $100 million teaching and research facility for the Ferguson College of Agriculture. To date, about $30 million has been raised for the building, including the facilities portion of the Fergusons’ gift and commitments from five Cornerstone Donors, who have pledged at least $1 million to the project.

Architectural planning and programming have already begun on the new facility, which will be located north of the Henry Bellmon Research Center on the east side of Monroe Street, diagonally across from the aging Agricultural Hall. The existing Agricultural Hall has served the Division of Agricultural Sciences and Natural Resources since the late 1950s.

The facility will include innovative and flexible teaching and research laboratories, dynamic classrooms, faculty offices, robust student services programs and a variety of strategically planned spaces to encourage collaboration, development of new OSU Extension programming and a sense of community. The state’s 4-H headquarters also will be located in the building, as well as a re-envisioned Dairy Bar. The university is expected to break ground on the building next spring, with an expected completion date of fall 2023.

About the OSU Foundation

The Oklahoma State University Foundation serves as the private fundraising organization for OSU, as designated by the OSU Regents. Its mission is to unite donor and university passions and priorities to achieve excellence.

Oklahoma State University is a modern land-grant university that prepares students for success. OSU has more than 34,000 students across its five-campus system and more than 24,000 on its combined Stillwater and Tulsa campuses, with students from all 50 states and around 100 nations. Established in 1890, OSU has graduated more than 275,000 students to serve the state of Oklahoma, the nation and the world.

OSU’s Division of Agricultural Sciences and Natural Resources is comprised of the Ferguson College of Agriculture and two state agencies: the Oklahoma Agricultural Experiment Station and the Oklahoma Cooperative Extension Service. OSU Agriculture is dedicated to making available research-based information relevant to improving the quality of life for the people of Oklahoma and beyond.

Tammy Will named Ag in the Classroom Teacher of the Year
March 10, 2020