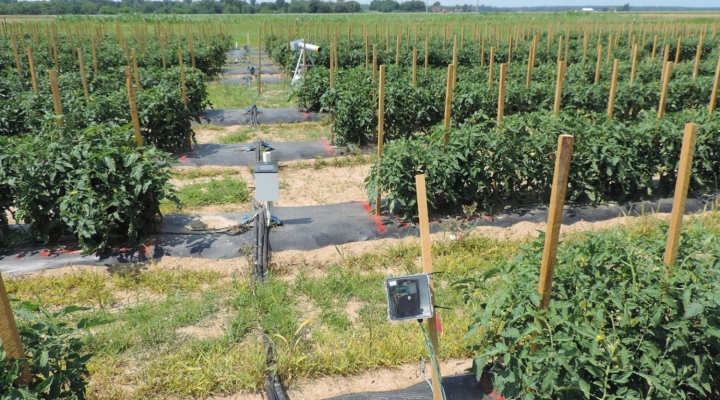 UNIVERSITY PARK, Pa. — An “internet of things” — or IoT — system monitoring real-time data from soil-based sensors to activate an automated precision irrigation setup can conserve water and boost crop production, according to a team of Penn State researchers.

“These results suggest that the internet-of-things system can be implemented for precision and automatic irrigation operations for vegetable and other horticultural crops, enhancing those crops’ water-use efficiency and sustainability,” said team leader Long He, assistant professor of agricultural and biological engineering in the College of Agricultural Sciences. “Overall, the LoRaWAN performed well in power consumption, communication, sensor reading and valve control.”

The open field irrigation-management experiment, spearheaded by Haozhe Zhang, who recently graduated with a doctoral degree in agricultural and biological engineering, tested the effect of four irrigation-scheduling treatments on fresh-market tomato plants. The experimental treatments included irrigation based on feedback from crop evapotranspiration (the process by which water is transferred from the land to the atmosphere by evaporation from the soil and by transpiration from plants), soil moisture potential sensors and “GesCoN,” a decision-support tool for the “fertigation” of tomato. Fertigation is the injection of fertilizers into an irrigation system.

Irrigation water-use efficiency and crop yield were evaluated for each treatment. In findings recently published in Smart Agricultural Technology, the researchers reported that throughout the growing season, the overall water use efficiencies of the methods ranged from 22% to 28% above the control, and they produced 15% to 22% higher marketable fruit yield than normal.

Research team member Francesco Di Gioia, assistant professor of vegetable crop science, said the study is important because agriculture is a major consumer of ground and surface water in the United States, accounting for approximately 80% of the nation’s consumptive water use — and this percentage can be higher in the western states with their dryer climate. As the global population continues to grow, food-crop production is expected to increase dramatically while water resources will be limited.

Di Gioia pointed out that the research is innovative and significant because the LoRaWAN technology it utilized is simple and relatively inexpensive. That will be important going forward, he believes.

“To be adopted, the whole system has to work for smallholder farmers,” he said. “So, all of the components are low cost. Our focus was to keep it inexpensive because there’s nothing really available at the commercial level that fulfills the need of smallholder farmers and small diversified growers. We spent less than $1,000 putting our IoT system together, and it’s something that people without specific knowledge can do. You don’t have to be an engineer to develop something similar to work on a small produce-growing farm.”

Conventionally, farm managers determine when and how much to irrigate primarily based on their experiences and time availability, which often leads to inefficient water usage and reduction in crop yield and quality either by over-irrigating or under-irrigating, Di Gioia explained.

Precision irrigation is a management strategy that allows growers to avoid plant water stress at critical growth stages by applying only the necessary amount of water directly to the crop, with rate and duration based on site-specific conditions.

“We are trying to improve the efficiency of resources used in production systems, and the nice thing about this technology is that it could be applied to many crops,” he said. “In this case, we are working with vegetables because vegetables are really sensitive to drought stress. This precision technology could be implemented right away by the vegetable industry here in Pennsylvania or elsewhere.”

This research was funded by the U.S. Department of Agriculture’s Northeast Sustainable Agriculture Research and Education program and USDA’s National Institute of Food and Agriculture. The study was supported by the Pennsylvania Vegetable Growers Association and the State Horticultural Association of Pennsylvania.