Home » International travel can be a pathway for introducing invasive species 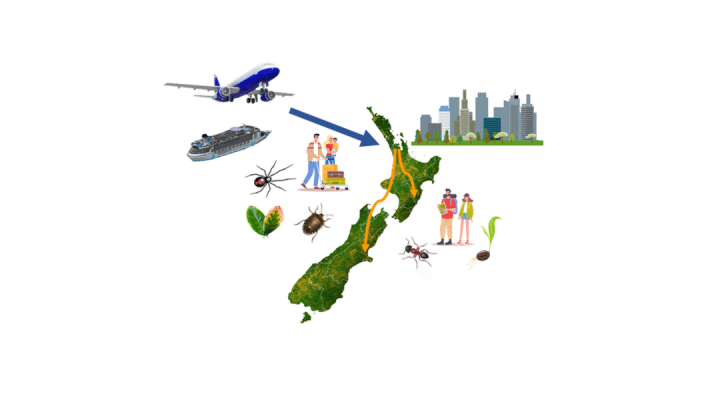 WELLINGTON, New Zealand — Tourism is an important economic driver of the world’s economy, providing a significant contribution to the income of many countries. However, tourism can also contribute to the introduction and spread of unwanted exotic organisms such as insect pests or weed seeds across countries. These can be harmful to the natural environment and agriculture, causing social, environmental, and economic damage.

Tourists, albeit unwittingly, may help such unwanted organisms spread further and conquer new lands – they can carry them over in their luggage or on their clothes and shoes. In 2011, a study from New Zealand found that, for every gram of soil on the footwear of aircraft passengers arriving from abroad, there were 2.5 plant seeds, 41 roundworms, 0.004 insects and mites, and many microorganisms, such as fungi that could cause plant diseases. Moreover, these organisms were alive, and some of them were known to be biosecurity threats. Importantly, tourism can introduce risk in two directions, namely from the arrival of international travellers and also the return of residents from international travel.

An important question, then, is to what degree they play a role in the spread of exotic organisms. A study, carried out by Dr Andrew Robinson of the Centre of Excellence for Biosecurity Risk Analysis at the University of Melbourne and Mark McNeill of AgResearch New Zealand, looks to answer that question.

To do so, the researchers compared data on the interceptions of exotic organisms in New Zealand against accommodation data for international and domestic tourists, factoring for the country’s population distribution. The study, recently published in the open-access journal NeoBiota, covered the period between 2011 and 2017, and the exotic organisms that were detected included insects, spiders, mites, snails, plants, and roundworms.

Robinson and McNeill found a significant relationship between levels of incursion detection and tourism accommodation records: the number of nights spent in hotels significantly correlated to the detection of exotic pests for that period. Importantly, the study found no significant difference between the effect of international and domestic tourism, proving that even travel within the country can facilitate the spread of exotic species. A significant positive correlation was also found between the detection of exotic organisms and population numbers across different regions.

“The core take-home message is that within-country tourism movements are significantly correlated to the detection of exotic pests,” the researchers explained. That is, tourists and returning residents bring bugs in, and both are implicated at spreading them once they are in the country. They suggest that biosecurity authorities should continue allocating resources to the management of invasive species and pests that get carried around by tourists and their activities.

However, they also point to the biosecurity risk posed by other possible pathways for of exotic organisms, such as sea freight. A comparison between the different ways of introduction and dispersal would provide a better understanding of relative risk, they conclude.

USDA invests $1.4 billion to strengthen the economy in rural America