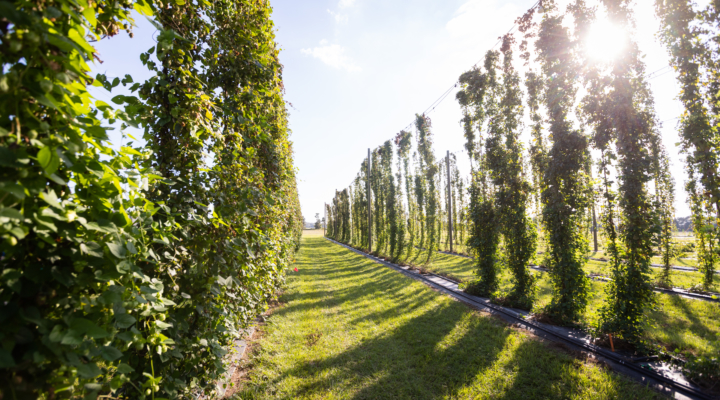 Several Tampa Bay area breweries have come to the UF/IFAS Gulf Coast Research and Education Center (GCREC) to pick up hops and brew them. In fact, one brewery came to the center in October, said Shinsuke Agehara, the scientist who leads the UF/IFAS effort to grow hops. (photo provided by UF/IFAS)

BALM, Fla. — Tampa Bay microbreweries have a hankering for hops, and some see a University of Florida experimental farm as a source for the crop that will help quench their customers’ thirsts.

Several Tampa Bay area breweries have come to the UF/IFAS Gulf Coast Research and Education Center (GCREC) to pick up hops and brew them. In fact, one brewery came to the center in October, said Shinsuke Agehara, the scientist who leads the UF/IFAS effort to grow hops.

“Several breweries have visited our hops yard to evaluate the crop’s quality,” said Agehara, an assistant professor of horticultural sciences at the UF/IFAS GCREC. “We also have provided hops to several breweries, and they formulated special recipes and brewed beer using our hops.”

Scientists at GCREC are trying to grow hops at the center because craft beer is big business nationwide as consumers crave the trendy tastes.

According to the Brewers Association, there were 285 craft breweries in Florida in 2018 – the latest year for which data are available. That figure is up from 45 in 2011. The association credits craft breweries with having more than a $3 billion economic impact on Florida.

In addition to helping to meet consumer demand by growing hops at the center, UF/IFAS researchers are trying find new crops for farmers to grow.

Hops were just one of the highlighted crops at the Nov. 21 Florida Ag Expo at the GCREC. With more than 2 acres, the UF/IFAS Gulf Coast REC now has one of the biggest hops yard in Florida.

To get hops to grow better, Agehara recently installed V-shaped trellises at the GCREC hops yard. Hops grow best in the Pacific Northwest, mainly because of the ideal climate, but partially because growers use 18-foot-high V-shaped trellises that can maximize the growing space, Agehara said.

Most people Central and Southwest Florida who are trying to grow hops are doing so on ¼-acre to 1-acre parcels, he said.

“We are trying to see how much we can increase the yield with V-shaped trellises,” Agehara said.“Since hops already established at the center are growing well, I think we can benefit from V-trellises, despite the higher construction cost.”

If you want to grow hops, it might help if you use LED lighting. Agehara uses this overhead lighting system to create optimum daylight environments for hops development. It’s critical to get more than 17 hours of daylight during the early season to maximize hops growth before flowering, Agehara said.

Between the V-shaped trellises, the LED lighting and other experiments, Agehara is confident in the hops science they’re performing at GCREC.

“We are conducting the best research to make sure hops can grow in Florida so we can help meet consumer demand for craft beer sellers and consumers in the Sunshine State and beyond,” he said.

UF/IFAS to explore how to support urban farming across Florida
August 5, 2020

Preparing for 2020 hurricane season in midst of pandemic
August 5, 2020