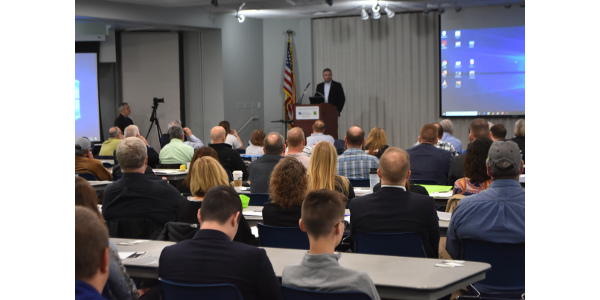 “I get excited when I get to work with the hemp industry because you all are energized; you are literally the tip of the spear and the rest of the nation continues to look at Kentucky as the epicenter, for what’s next in industrial hemp,” Kentucky agriculture commissioner Ryan Quarles told the enthusiastic group. (Courtesy of Farmstead Media)

(A version of this article appears in the April 19, 2018 edition of The Farmer’s Pride)

FRANKFORT, Ky. — Judging from the turnout at the 2018 Kentucky Hemp Industries Association annual meeting, interest in producing the controversial crop is continuing to grow. The meeting, held at the Fayette County extension office, drew a capacity crowd consisting of participants currently engaged in the industry and newcomers seeking to learn more about the possibilities of the historically significant yet still-experimental business.

“I get excited when I get to work with the hemp industry because you all are energized; you are literally the tip of the spear and the rest of the nation continues to look at Kentucky as the epicenter, for what’s next in industrial hemp,” Kentucky agriculture commissioner Ryan Quarles told the enthusiastic group.

The commissioner continued by offering a little historical and personal perspective.

“In the year 1900, 75 percent of the hemp grown in the United States came from the nine counties that surround Lexington,” Quarles reflected. “My great-grandfather grew industrial hemp on the banks of the Kentucky River during World War II. While my grandfather served as a Marine in the Pacific, my great-grandfather was supporting the war effort by growing hemp where the Elkhorn Creek flows into the Kentucky.”

Currently in the commonwealth, 210 growers have applied for permits to grow hemp and there are 52 registered processors in the Commonwealth, up 20 percent in just the last year according to Quarles.

One of those producers is Marion County cattleman Steve Downs.

“This will be our second year for hemp. Last year we had a permit for 14 acres, but due to problems finding plants or seed we were only able to plant 3 acres,” Downs said. “We had a good turnout on the crop.”

“The permit is for 24 acres this year,” Downs continued. “We’re still waiting to see how much we can actually put out.”

A former tobacco producer, Downs sees hemp as a viable alternative but not necessarily a replacement. “Seems like the people you talk to that are trying it are having good luck with it. There’s a market there and it shows a lot of promise.”

University of Kentucky agriculture economist and assistant professor Dr. Tyler Mark is currently conducting some research on cost of production, how the crop will fit in to Kentucky’s overall agricultural landscape and what types of consumers are currently purchasing hemp-based products. There’s little data at this point so Mark says potential producers need to be prepared to incur some risk.

“Some producers may be out on a limb trying to find that golden ticket,” Mark said. “You have to be willing to lose whatever you put into the crop, because it may or may not pan out. There’s no crop insurance, there’s no safety net to this. You’re purely at your own risk and it is self-financed.”

As Commissioner Quarles points out the greatest current barrier to the potential success of the industry is federal law. “At this point, it is appropriate to recommend to congress that we legalize this crop, open the floodgates and give it the respect that it once had, back when it was a legal crop.”

Recently Senator Mitch McConnell was at the Department of Agriculture to announce plans to introduce the Hemp Farm Act of 2018. “First and foremost, this bill will finally legalize hemp as an agricultural commodity and remove it from the list of controlled substances,” McConnel said. “We all are so optimistic that industrial hemp can become, sometime in the future, what burley tobacco was in Kentucky’s past.”

“We in agriculture are always looking for that replacement crop that we can grow profitably, because every time there’s stress on commodity prices, as there are now, we’re looking for a better way,” USDA Secretary Sonny Perdue said on his recent sweep through the Bluegrass. “We’ve seen the American spirit alive and well in farmers because they are practical innovators. I think hemp has proven to be an economically valuable industrial crop and I think you’ll see policy follow that.”

— Ray Bowman, The Farmers Feeds Us All