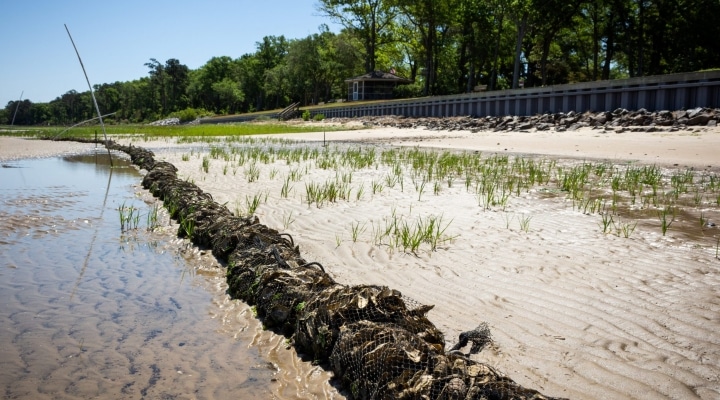 As the South Carolina coast faces challenges of snowballing sea level rise and shoreline erosion, new resources are available from Clemson Extension and state and private partners to provide property owners with an environmentally friendly approach to addressing the issues. These resources include a new website hosted by Clemson University that walks property owners through the process from start to finish. (photo by Clemson University)

CLEMSON, S.C. — Since moving to a coastal property in Charleston County in 1989, Jonathan Zucker has seen the marsh line recede by some 40-50 feet from a marker that was once surrounded by grass but is now completely covered by water.

“Over time and comparing the satellite imagery, too, you can see how much of the marsh grass has disappeared,” Zucker said, “and we know that’s critical habitat, and it serves as a natural protection for the rest of the marsh and then ultimately for people’s property.”

Just south in Colleton County, Glen Haynes purchased a property at Bennett’s Point in 2011 and, within two years, realized he was losing about 5 feet of marsh each year to erosion.

Faced with similar problems, Zucker and Haynes ultimately landed on similar solutions, as both decided the best course of action was creating a living shoreline — a powerful tool to protect the shore and prevent erosion using native vegetation and/or green infrastructure, materials such as oyster shell, to promote the health and growth of the native ecosystem and help maintain the land and water connection.

“I began the process of becoming educated about what has been done and what could be done to stem this erosion,” Haynes said. “With the help of Dr. Al Segars with the S.C. Department of Natural Resources (SCDNR) and Joy Brown with The Nature Conservancy (TNC), we formulated a plan involving a living sill consisting of oyster castles and later stacked and staked oyster bags. Both have been very effective in stemming the loss of marsh.”

As the South Carolina coast faces challenges of snowballing sea level rise and shoreline erosion, new resources are available from Clemson Extension and state and private partners to provide property owners with an environmentally friendly approach to addressing the issues. These resources include a new website hosted by Clemson University that walks property owners through the process from start to finish.

“In Charleston Harbor, it’s been documented that we’ve had 1 foot of sea level rise in the past 100 years and now we’re planning for 2-3 feet of sea level rise in the next 50 years,” Clemson Extension Water Resources Associate Kim Morganello said. “Living shorelines are a way to basically adapt our shorelines. Because one of the things that we’re concerned about, with those rising seas, is that we’re going to start to lose salt marsh.”

And salt marsh is an integral part of South Carolina’s landscape. Its 344,500 acres of salt marsh are the most of any state on the east coast and make up two-thirds of its coastal wetlands, according to SCDNR, significantly increasing habitat for aquatic organisms.

This year, the S.C. Department of Health and Environmental Control (DHEC) completed a 5-year strategy that resulted in a regulatory definition and project standards for living shorelines in South Carolina. The goals of the strategy were to provide residents with an additional option for stabilizing estuarine shorelines, allow for a more efficient authorization process for living shorelines and help ensure a project’s design would accomplish its intended goals.

Peter Kingsley Smith, senior marine scientist with SCDNR, called the website “a great resource” for information about living shorelines, including their history of use and available options for reducing erosion and creating habitat.

“It is our hope that this website will be a starting point for both interested private citizens, as well as practitioners and contractors, before they approach the regulatory agencies to discuss options and pursue permits for installations of living shorelines, thereby helping to facilitate their broader adoption,” he said.

Living shorelines protect land from erosion and provide several additional ecosystem benefits, as they create essential habitat by promoting marsh and oyster growth, buffer boat wakes and wave energy, sequester carbon, and, depending on the materials used, filter pollutants from the water.

Oyster-based living shorelines may offer a buffer against the threat of sea level rise and, as sea level rises, oyster reef heights naturally increase, thus persisting as natural, growing breakwaters that adjust to the change in tidal elevation. These benefits enhance the health and resilience of our coasts while also providing natural protection for property on adjacent uplands.

“There are literally thousands of homes in South Carolina on tidal creeks and salt marshes, and many of those are experiencing shoreline erosion,” Morganello said. “Because it is such a dynamic system — the tide comes in and goes out twice a day; there are storms — shoreline erosion is inevitable. But to date, property owners have only had the option to either put rip rap like concrete blocks in the marsh to stabilize their shoreline or to build a seawall or a bulkhead.”

But neither of those solutions are ideal from an ecological standpoint, nor do they offer many of the benefits of a living shoreline.

“Now people have the ability to plant more salt marsh or use different methods of establishing an oyster reef, which essentially becomes a hardened structure,” Morganello said. “But it’s habitat and it filters the water and does all these wonderful things for our environment. So, now people can do that instead of putting in a hardened structure.

“As the sea level rises, the salt marshes do need to be above water for part of the day, so this is kind of a way to adapt our coast and hopefully make it more resilient, as well as protect private property adjacent to the salt marsh.”

Zucker, who also serves as chairman of the S.C. Aquarium board of directors, says his 15 years of involvement with the Aquarium has helped him understand the opportunities that exist to make a difference and see the impact of how population growth in Charleston and elsewhere can change the environment.

“I totally believe that we are at the point where if we don’t act with intent right now then 10 years from now it’s going to be too late,” he said. “We’ve got to really make a difference now. Part of it is just wanting to lead by example — I’ve been the chair at the Aquarium now for 7 years — and wanting to continue the impact of that … but also show the general public that there are things they can do that are within their reach to try and make a difference. A living shoreline accomplishes more than a sea wall. We know it does.”

And Haynes has seen that impact firsthand since he began placing oyster castles in front of the marsh on his property in November 2015. He completed the sill the following June, placed oyster bags on the marsh unprotected by the castles in 2017 and extended the bags across the barren area in front of the hard seawall in March 2020.

“To my amazement, this area has filled in with sediment and is beginning to support marsh grass,” he said. “The marsh 20 feet or so behind the sill is continuing to subside, erode, but the foot of the marsh is now stable so the grass is not lost or washed away in the area subsiding. The results have been remarkable. The marsh appears stable, the fishing is better than ever, the water is clearer and the shore exposed at low tide is now much more sand and shell than mud. This is such a better solution than using a sea wall or rip rap to save my embankment from erosion after the marsh would have eroded away.”