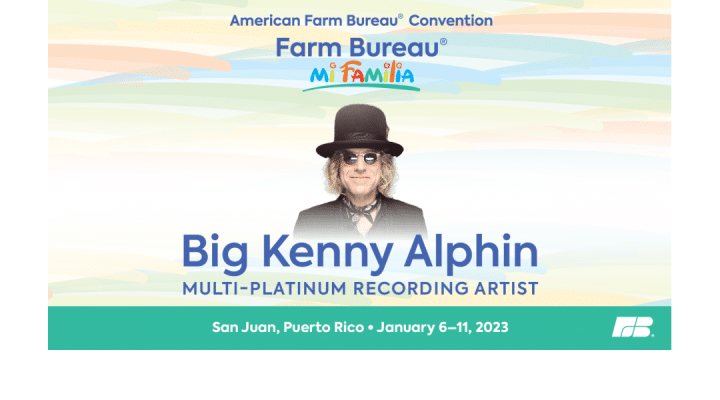 Big Kenny Alphin will speak about his philanthropic outreach efforts to end hunger during the afternoon general session at the convention on Sunday, Jan. 8, in San Juan, Puerto Rico. (Courtesy Image)

SAN JUAN, Puerto Rico — Renowned artist, songwriter and humanitarian Big Kenny Alphin will surely inspire attendees as general session keynote speaker during the 2023 American Farm Bureau Convention. Big Kenny – along with his counterpart John Rich – shares his heart, soul and artistry in the spectacular partnership of Big & Rich. He will speak about his philanthropic outreach efforts to end hunger during the afternoon general session at the convention on Sunday, Jan. 8, in San Juan, Puerto Rico.

“Reflecting on progress, celebrating achievements and hearing from leaders who have made a difference for agriculture are all part of the 2023 American Farm Bureau Convention,” said AFBF President Zippy Duvall. “We’re also excited about spending time with Big Kenny Alphin. We look forward to hearing about his inspiring commitment to ending hunger both in local communities here in the U.S., and globally.”

While “big” is an apt description of both Big Kenny’s towering stature and his colossal in-the-spotlight charisma, it also describes the vast sweep of his humanitarian contributions, powerfully demonstrated through his Love Everybody Foundation, which aims to “highlight the good, inspire greatness and encourage mutual responsibility for the betterment of humankind.” Big Kenny does much more than just play benefits and sign checks. He bears powerful witness to a compassionate mission that knows no borders in quests for long-term solutions and sustainability.

The convention will be held Jan. 6-11, 2023, in San Juan, Puerto Rico, with Duvall giving his annual address to Farm Bureau members during the opening general session on Sunday morning, Jan. 8.

The official event hashtag is #AFBF23 and the event website is https://annualconvention.fb.org/.

Big Kenny grew up on a cattle farm in Culpeper, Virginia, as the youngest of four children. He sang in church choir and played the saxophone. Following a move to Nashville in the late eighties, he was signed as a songwriter. After five years of penning lyrics and melodies for others he was inked to Hollywood Records as a solo artist.

As Warner Bros. recording artists, Big & Rich debuted with the triple platinum album “Horse of a Different Color.” Over time, dozens of Grammy, ACM, CMA and CMT Music Award nominations followed with collections like “Comin’ to Your City,” “Between Raising Hell and Amazing Grace,” “Hillbilly Jedi” and “Gravity” – which included three consecutive Top 10 hits – and their most recent collection, “Did It For The Party,” which debuted at number one on the sales charts.

One of Big Kenny’s most treasured honors was being named the second U.S. recipient of the African Children’s Choir Malaika Award, for his work in the Sudan on behalf of Africa’s most vulnerable children. 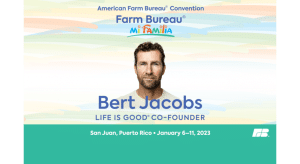 WASHINGTON — Bert Jacobs, co-founder and Chief Executive Optimist of the $150 million lifestyle brand Life is Good®, will address attendees as general session keynote speaker during the 2023 American Farm Bureau Convention. When Jacobs and his brother John started the company in 1994, they had $78 in their pockets, lived out of their van […] 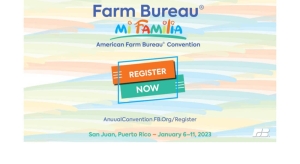