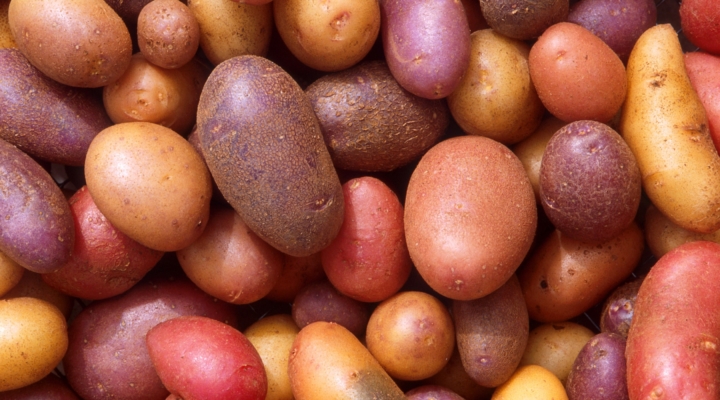 A technology developed by ARS scientists is being used to boost resistance to a disease in potatoes that can destroy entire fields and often requires growers to repeatedly spray fungicides. The technology also may be used to breed improved varieties of many other important crops. (Photo by Scott Bauer)

WASHINGTON — Agricultural Research Service (ARS) scientists in Albany, California, have found a way to streamline the process that scientists use to insert multiple genes into a crop plant, developing a reliable method that will make it easier to breed a variety of crops with vastly improved traits.

The technology is expected to speed up the process for developing new varieties of potatoes, rice, citrus and other crops that are better equipped to tolerate heat and drought, produce higher yields and resist a myriad of diseases and pests. Crops with greater resistance to pathogens and insects could greatly reduce pesticide use and prevent billions of dollars in crop losses.

“Making genetic improvements that were difficult or impossible before will be much easier because we can now insert not just one or two genes, but multiple genes, into a plant in a way that will lead to predictable outcomes,” said Roger Thilmony, an ARS molecular biologist in Albany.

A paper describing the achievement by Thilmony, James Thomson, an ARS geneticist in Albany, and Ray Collier, a former ARS postdoctoral researcher, was published today in the August issue of The Plant Journal.

The GAANTRY gene stacking technology will be freely available to anyone interested, and a commercial firm is planning to use it to introduce multiple genes into potatoes to make them more resistant to late blight, which is caused by a fungus-like organism. Late blight can destroy entire fields and force some farmers to spray fungicides up to 15 times a year.

“We have struggled to put multiple late blight resistance genes into potatoes for years. They are very long, complex genes, and with existing technologies it’s been extremely difficult. But the GAANTRY technology will help us tremendously,” said Craig Richael, a director of research and development for J.R. Simplot Co., an Idaho-based company that produces French fries, frozen vegetables, fertilizer, turf grass seed and other products.

Scientists over the years have modified the genetics of soybeans, corn, canola and other crop plants to develop varieties that tolerate specific herbicides and resist insect pests. But those traits were controlled by one or two genes, and in most crop plants, important traits such as cold and drought tolerance, yield and seed production are almost always controlled by multiple genes. Inserting more than two or three genes into the same site on a plant chromosome has been notoriously difficult.

The researchers’ unique platform stabilizes large “stacks” of DNA needed for conferring key traits, allowing researchers to insert suites of genes “so precisely that no unintended DNA is added or lost during the process,” says Thomson.

“Before this, assembling 10 genes to insert into a new line would be difficult or impossible, but this technology basically stabilizes the stack and makes for results that are more stable and much easier to predict,” Thilmony said.

Read the report in The Plant Journal.