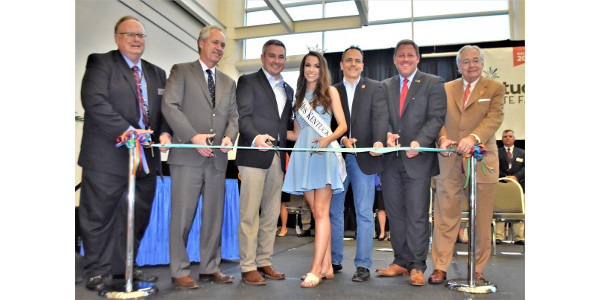 FRANKFORT, Ky. — (A version of this article first appeared in The Farmer’s Pride, September 7 issue)

Astute visitors to the 2017 Kentucky State Fair no doubt recognized many of the elements that have spelled success for the event in years past, yet there were some distinct changes that may have met with mixed reactions according to Jason Rittenberry, who served as fair board president and CEO during the annual event. Rittenberry resigned a week later.

Those changes included a new mobile application to help fair goers plan their visits in advance and express lanes at some of the gates to allow pre-paid attendees quicker access to the venue.

Those attending the opening morning Commodity Breakfast were welcomed by a new, bigger tent that provided better crowd flow and more room.

Another modification was to rename the Midway “Thrill Ville” and move it to a more centralized, higher visibility portion of the grounds. “The Midway has been way up on attendance, it’s been easier to find and it’s been front and center, which was really my goal.”

Rittenberry abruptly resigned September 1. According to an article in the Louisville Courier-Journal, fair board chairman Dr. Mark Lynn said Rittenberry resigned because of pressing family matters. Rittenberry was not available for comment when the article was published.

Rittenberry accepted the position last November, his third day on the job being the opening day of the North American International Livestock Exposition.  However, as a finalist for the job last summer, he paid a visit to the 2016 Kentucky State Fair to see what he might be getting himself into.

The 42-year-old Tennessee native brought a wealth of entertainment experience to his new job, even though his agriculture experience was limited to time spent on his grandparents’ tobacco farm. Rittenberry served as president and CEO of the Florida-based IRG Sports+Entertainment managing venues nationwide. His most recent position before coming to Louisville was chief strategy officer for the Texas auto racing complex Circuit of the Americas, which also included Austin360 Amphitheater and the AT&T Events Center.

Rittenberry is known for a very hands-on approach to his projects, and that was very much in evidence at this year’s Fair, as he attended every major event.

To better describe the scope of his new organization, Rittenberry rebranded the Kentucky State Fair Board as Kentucky Venues. The name, he feels, is a more accurate reflection of the diverse activities taking place at the Kentucky Exposition Center and the Kentucky International Convention Center, the two properties overseen by his agency.

Overall, this year’s fair drew more than 609,000 visitors during an 11-day run, exceeding last year’s attendance by more than 44,000, even after being impacted by two days of rain. Last year, only one day of the Fair’s run was affected by inclement weather. Pleasant temperatures and clear skies for the closing weekend of the fair may have well made up for the earlier deficiencies, according to Rittenberry.