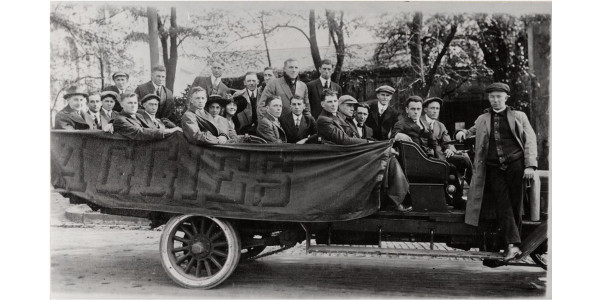 The Colorado Agricultural College was officially founded in 1870 as a land-grant college under the Morrill Act of 1862. Ten years later, in 1880, when the first classes were held, they included botany, mathematics, and natural philosophy (physics) – disciplines within natural sciences. (Courtesy of CSU)

FORT COLLINS, Colo. — When Colorado State University was founded in 1870 as the Colorado Agricultural College, it had a profound mission – to provide access to education for anyone willing to attain it. While the focus of the land-grant mission was on studying “the agricultural and mechanic arts,” the natural sciences were essential to the understanding of those fields.

Foundational science classes were among some of the first offered by the school, and today they are part of the University’s core curriculum.

Physics, biology, mathematics and chemistry were fields of study harnessed to the practical applications of agricultural research at CAC. Since the establishment of the College of Natural Sciences at CSU in 1968, these disciplines have been joined by biochemistry and molecular biology, computer science, psychology and statistics as major centers of both theoretical and applied research and education for the University.

Education in the natural sciences teaches students new ways to ask questions, think critically, find answers, and solve problems. Discoveries made in the College of Natural Sciences have changed our world for the better.

For example, Melissa Reynolds, associate dean of research for the college, has developed biocompatible materials to detect and combat bacterial infections that can be integrated into medical devices for humans. Joe von Fischer, associate professor in the Department of Biology, has developed an innovative way to track invisible underground methane leaks using Google Street View cars.

Here are a few pivotal moments in the history of natural sciences at CSU.

Housed today in the Department of Biology, the CSU Herbarium holds more than 100,000 plant specimens. These meticulously collected and archived specimens serve as an invaluable documentation of the history and evolution of Colorado flora. While the herbarium is now well established, it started as a novel idea with humble roots. In 1883, botanist James Cassidy began collecting and preserving plant species from around Colorado, creating the first herbarium in the Southern Rockies. Today, the herbarium is not only an important tool for researcher, but visitors can experience what Colorado landscapes were like throughout time, including glimpses of many species that have gone extinct. Learn more about the CSU Herbarium

In 1958, Genevieve Garst, who had degrees in mathematics and engineering from the University of Wisconsin, moved to Fort Collins to teach the first computer science class at CSU. Garst’s classes were taught more than a decade before computer science was established as a program under the Department of Mathematics at CSU. The Department of Computer Science became its own department in the College of Natural Sciences in 1974.

Astronomy at CSU began in 1905 with Stuart Lincoln Macdonald, head of the Department of Mathematics and Astronomy under President Barton Aylesworth, sharing the observation of space with students using a 4-inch telescope. That telescope was used for astronomy classes and research until 1965, when the new head of the department, M. Leslie Madison, opened an observatory with a 16-inch telescope. Today, students and community members can visit the Madison-MacDonald Observatory to learn more about the universe. Learn more about the Madison-MacDonald Observatory

College of Natural Sciences is formed

The 1960s and 1970s marked an important era in chemistry at CSU with two monumental discoveries – the Meyers Reaction and the Stille Reaction. In 1969, chemistry faculty member and University Distinguished Professor Albert Meyers described the Meyers Reaction, an efficient way to make carbon bonds. Meyers went on to be elected to the National Academy of Sciences. In 1978, chemist John Stille reported the Stille Reaction, which is widely used in organic synthesis. It is largely agreed that Stille had the chance to win a Nobel Prize, but tragically was among the 111 people killed in the crash of Flight 232 in Sioux City, Iowa, in 1989.

Known for brightly colored tie-dye t-shirts and making science fun and accessible for all ages, the Little Shop of Physics was founded in 1992. Still operating today, this hands-on science program has taken science around the world and is a cornerstone of CSU’s education and outreach mission. In February 2020, the Little Shop of Physics will hold its 29th annual open house. Learn more.

Department of Psychology researcher Jerry Deffenbacher developed the Driving Anger Scale in 1994. This scale helped categorize the anger felt by drivers when they are experiencing road rage. Further research by Deffenbacher found that drivers who were able to recognize their anger were able to use short-term therapy techniques, such as deep breaths, to help calm themselves.

Professor Jennifer DeLuca is the first CSU faculty member to be named a Pew Biomedical Scholar for her work at CSU. DeLuca, a professor in the Department of Biochemistry and Molecular Biology, researches protein structures involved in chromosome segregation during mitosis. Her work, in collaboration with medical researchers, has the potential to fundamentally change how cancers and other diseases are treated. She was named a professor laureate, the highest academic honored bestowed by the College of Natural Sciences, in 2019.

The College of Natural Sciences Learning Community was founded in 2014 with a focus on creating a living and learning environment for science students. Now housed in Laurel Village, the learning community is made up of 400 College of Natural Sciences students. Students have the option to join specific groups within the learning community, including science outreach scholars, diversity through technology, diversity through sustainability, and women in natural sciences. Learn more

This milestone year for the College of Natural Sciences saw the opening of two new buildings – the Biology Building and the Chemistry Research Building. Filled with advanced research labs and creative student learning spaces, these buildings provide the space necessary for faculty and students to continue innovating, and, for the first time, brought the Department of Biology under one roof.

University Distinguished Professor Diana Wall became the first female faculty member from CSU named to the National Academy of Sciences. Wall, director of the School of Global Environmental Sustainability and a professor in the Department of Biology, studies soil ecology. Her revolutionary work studying soil biodiversity in Antarctica has been a major contribution to scientists’ understanding of climate change. Read more about Wall

Science is constantly evolving, and the College of Natural Sciences will evolve along with it over the next 150 years. From developing renewable polymers, to making advances in artificial intelligence, to treating mental health and addiction, discovery begins with the natural sciences.

An apple galaxy close to you