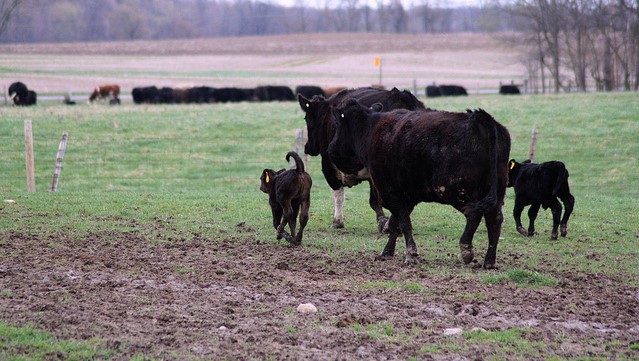 Dan Shike, associate professor in the Department of Animal Sciences at U of I, sees value in the product because trace minerals play critical roles in overall cattle health and productivity. And ingestible trace mineral products, such as free-choice minerals in pasture-fed cattle, can be hit-or-miss. (GollyGforce - Living My Worst Nightmare, Flickr/Creative Commons)

URBANA, Ill. — It can be a struggle for beef cattle producers to maintain mineral status, especially for cattle on pasture, so many implement a trace mineral supplementation program. But research on newer trace mineral strategies, including injectables, has been inconsistent and incomplete. In a set of recent studies, University of Illinois animal scientists study the effects of the injectable trace mineral Multimin®90 on reproductive performance in beef heifers.

“We definitely have heard a lot of producers asking, ‘What about this product? Does it work?’ So we started to do studies on it,” says Dan Shike, associate professor in the Department of Animal Sciences at U of I.

In the first study, published in Translational Animal Science, Shike and his research team injected heifers with Multimin®90 at a rate of 1 milliliter per 68 kilograms, 33 days prior to artificial insemination (AI). The heifers were spread out in three herds across Illinois, in Champaign, Simpson, and Baylis.

“In those three herds, we had variable results,” Shike says. “In two of the herds, we had very good AI conception rates in our controls, so we were already doing well and did not see a response to the injectable. In the last herd, the controls were below where we would like to see. By giving the Multimin®90, there was an improvement in conception rates. In that particular case, it appeared that trace mineral was limiting.”

In the second study, in the Journal of Animal Science, Shike and his team injected Multimin®90 into heifers every 90 days from weaning to final pregnancy confirmation, at variable rates according to age, body weight, and label specifications. It is the first published study to evaluate the effects of repeated trace mineral injections.

In this case, the injections had no effect on reproductive performance, but selenium and copper status improved compared to animals that received only saline injections.

In explaining the result, Shike says it’s complicated. “In pregnancy, there are so many factors, but the result is either yes or no. In this particular study, the limiting factor was not trace mineral. We had a tougher forage year, so all the heifers were a little lighter, thinner than expected. In this case, overall energy status was likely the most limiting.”

Even if it doesn’t make a huge difference in reproductive performance, Shike still sees value in the product because trace minerals play critical roles in overall cattle health and productivity. And ingestible trace mineral products, such as free-choice minerals in pasture-fed cattle, can be hit-or-miss.

“When producers ask about this, my first questions are, ‘How have your AI conception rates been? Are you hitting a home run every year?’ If so, then you probably don’t have a trace mineral issue.

“But if you’ve had poor AI conception in three out of four years, you need to start evaluating. It may not be trace mineral, but it’s one of the things you should look at. Consider a different mineral program or an injectable. The value of an injectable is you pick the timing and you ensure every animal gets it.”

He says that value is worth it to some purebred seedstock producers, who view the injectable as a cheap insurance program. “If you can get a couple extra pregnancies out of this, you can pay for all your Multimin®90 for a couple of years in these operations.”

Conserving water in the Ogallala Aquifer