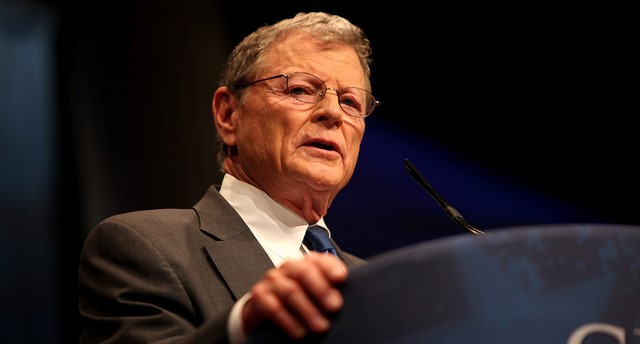 Inhofe:  … In your testimony you say that the biggest challenges to your industry are “urban encroachment, natural disasters, and government overreach.” I know a little bit about that and the lengths of government, what they can do and control every aspect of American life. I spent a number of years chairing this committee and we lived through that. I find it interesting that the last Administration agreed that these reporting requirements weren’t needed or wanted by agencies tasked with responding to emergency situations. Yet, the environmentalists sued and you have to wonder why. As you stated in your written testimony, there is no environmental benefit but it seems there is a lot of very specific information that is required in reporting these emissions. So, I would ask you, is there concern among your community—the farmers and ranchers–about how this information could be used to someone’s disadvantage if it were in the wrong hands?

Mortenson: Thank you for the question, Senator Inhofe. Yes, there is. I mean, we’re quite proud of our environmental record, not only on the ranch, but as a state. We’ve done a very good job of keeping the waters—

Inhofe:  That’s interesting that you’d say that—start off with that—because that’s so obvious. The ones who are really concerned are the ones who own the land and, yet, there is this idea that government has to come in and tell you how to make your land look right and perform right, but go ahead—

Mortenson: Yeah, absolutely. One thing I’d like to mention is our ranch was one  four that was featured in a Smithsonian exhibit called “Legacy of the Land” and it ran for six months and it was taken by the Library Association throughout the country on a four year tour. So, you know, we’re trying to do the right thing by the environment. It’s very important to us. We make our living off it. So, the problem I see coming is that there is not a whole lot of—people don’t know that this thing is coming. A lot of them are unaware of it and on May 1, it’s going to hit the fan. The manure is literally going to hit the fan, because they then have thirty days to report. And, where’s the information? Where do I get information on pasture-based livestock to make any kind of judgement on how much ammonia or hydrogen sulfide my cattle are producing? And, how does that change over the seasons? …

Inhofe concluded: … Let me just end on a positive note. Mr. Mortensen, you are probably familiar with a partnership program we did this program—it was back during the Obama Administration—and they came out and they inspected at our request. In fact I made this a requirement that they get confirmation  that they make at least two trips to my state of Oklahoma and really spend some time on the farms and the ranches and they came out with the conclusion at they are the ones who are really concerned about their own land, about the environment. And I thought that was a great discovery because that kind of broke the ice, in my memory, that government doesn’t know as much about your land as you do.

Mortenson: Absolutely. We hosted the regional—

Inhofe: Was that Fish and Wildlife that you hosted?

Mortenson: No it was the EPA Administrator out of Denver and I can’t remember what  her name is, very fine lady. We gave her a tour of the ranch, but she was really taken aback by what is going on on the land and the care that we not only give the livestock, but the land and the water and our concern for the health of it all. How it all works together as a system. If part of it isn’t healthy, none of it’s healthy. So, it’s very important to us—and I speak for myself and, I think, the industry as whole—that the environmentalist part of it is the most important part. We are trying to do the right thing and I believe we are.

Inhofe: I believe you are too. …

NASDA outlines expectations for the next Administration
October 15, 2020