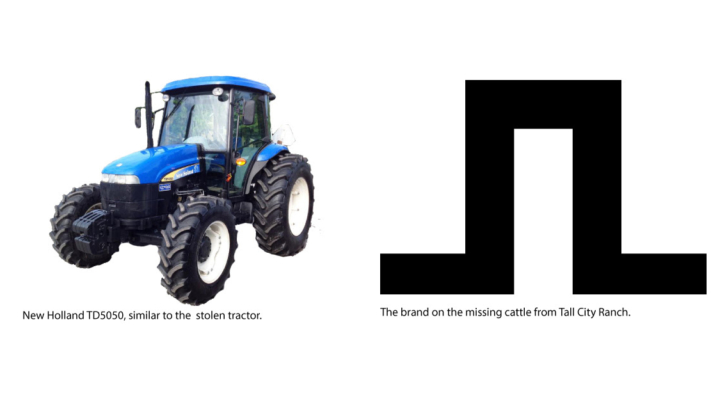 In the most recent incident, a tractor was stolen from a property in Crane County, near the Ward County line on Nov. 23, 2017. It is suspected that the 2010 New Holland TD 5050 was loaded onto a trailer after being removed from a field. The vehicle identification number (VIN) on the tractor is ZAJN50538.

The other incident occurred earlier this year outside of Midland. In that case, 21 cow-calf pairs and one bull were stolen from the Tall City Ranch, Southeast of the city. All of the cattle are black, and branded as pictured below. It was initially believed that the cattle may have wandered from the ranch, but investigators combed the area by air and were unable to locate the missing herd, leading them to believe the cattle were stolen.

The investigations into both cases are being led by Wadsworth. Anyone with information that could help identify the perpetrators, or locate the missing cattle or equipment should call TSCRA’s Operation Cow Thief hotline at (888) 830-2333 or Special Ranger Kenny Wadsworth at (325) 392-2552.

All information is kept confidential and tips may be provided anonymously.