Home » INFB farmers share mid-summer crop progress
Indiana Farm Bureau spoke to several row crop farmers in various counties across the state to gauge the growth and pollination of their corn, specifically, and to discuss how their own fields appear to compare to the estimates issued last week. (Wikimedia Commons)

INDIANAPOLIS — Many Indiana crop farmers were surprised by the findings of last week’s USDA crop production report. The report, which shares national and state forecasting, is estimating similar corn and soybean yields to last year in Indiana.

In many areas of the state, farmers were expecting lower yields than forecasted by the USDA in its August report. Indiana crop farmers battled rough weather conditions this spring, with extreme rains in April, followed by many unseasonably cold days through the first week of May.

Indiana Farm Bureau spoke to several row crop farmers in various counties across the state to gauge the growth and pollination of their corn, specifically, and to discuss how their own fields appear to compare to the estimates issued last week.

Kevin Cox of TST Farms in Parke County explained the situation many Indiana row crop farmers are seeing this summer.

“The corn that I planted early this spring is thin and the corn that I had to replant multiple times this spring is incredibly immature,” explained Cox. “In some areas, I have a nice, fully-developed ear of corn, but in many areas I have ears that are just beginning to be pollinated, which makes me about 30 days late on a lot of my corn.”

Roger Hadley, corn and soybean farmer and Allen County Farm Bureau president, had to replant roughly half of his corn this spring and explained that his replanted corn is just now pollinating. The corn that he did not replant is thin.

“When observing the crops while driving down the road, you feel good, but once you get above the crops, you can see the issues,” he explained. “This time of year, you shouldn’t be able to see the ground from above. That’s not the case in my field.”

Cox explains that when estimating your yields, you cannot simply consider the areas with zero corn due to flooding, but must consider the circle of crops around the flooded areas that is also affected.

“Those surrounding crops may not be down to the ground, but it’s not fully developed corn,” he said. “It doesn’t take a big area with zero crop to affect the overall field average.”

Despite some skeptical farmers across the state, others are seeing results similar to previous years.

“For our fields, I think things look ok right now,” stated Jordan Brewer of Brewer Farms in Clinton County. “The crops have grown out of that stage where you can see through them from the roads. The numbers did surprise me, but I have heard there are good results in the southern portion of the state.”

One of those southern Indiana farmers agrees that things are looking as expected this year compared to past years in his area.

“In southern Indiana, driving along the roads and observing the fields, it looks like it will be about as good as last year,” said Paul France, who farms in Gibson County.

The USDA crop yield estimates are used by farmers and other agriculture professionals to plan the marketing and movement of the commodity throughout the year.

“In the end, the market is always right,” said Brewer. “Individually, we may think that the yields will be different, but these reports are what we have to go off of, so we have to use these numbers going forward for our business.”

Weather for the remainder of the growing season is still the main factor in determining the success of the corn crop in Indiana this year.

“We just might be able to catch up if we have enough rain and warm weather for the rest of the season, but if there are any hiccups at all with the weather, there is no turning this around,” said Cox.

Indiana farmers will have to wait until harvest to truly learn how their yields compare to the state and the rest of the county.

“Until the combines roll, no one really knows the results,” said Brewer. 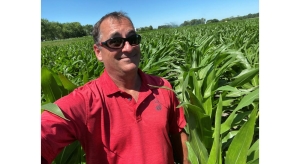 WESTFIELD, Ind. — While wet weather and cool temperatures delayed planting this spring, the corn crop looks “pretty good,” according to LG Seeds agronomists covering various regions across the Midwest. But those same agronomists expressed concern about heat, dryness and disease pressures like tar spot. “Growers have a lot invested in this year’s crop, so […]