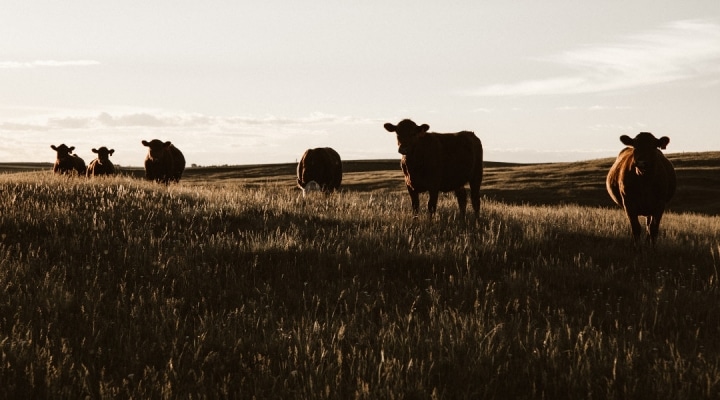 The "Examining Markets, Transparency, and Prices from Cattle Producer to Consumer" hearing was held Wednesday June 23, 2021. (Photo by Priscilla Du Preez on Unsplash)

WASHINGTON — Editor’s note: The below statements were released by industry organizations following the U.S. Senate Committee on Agriculture, Nutrition, and Forestry’s hearing entitled, “Examining Markets, Transparency, and Prices from Cattle Producer to Consumer.”

Today, Mr. Mark Gardiner, the owner-operator of Gardiner Angus Ranch and an NCBA member, testified before the U.S. Senate Agriculture Committee on key market challenges that have long threatened the profitability of cattle and beef producers. He was joined by leading industry economists who NCBA has worked closely with to explore solutions to the current unsustainable market dynamics.

The hearing titled, “Examining Markets, Transparency, and Prices from Cattle Producer to Consumer” addressed a wide range of issues, including the urgent need for robust price discovery and differing industry views on how to achieve it, greater market transparency and oversight, and expanded beef processing capacity.

“As we stated in our written testimony today, the wide-ranging market challenges our producers are facing cannot be remedied with a single solution overnight,” said NCBA Vice President of Government Affairs Ethan Lane. “We must address the issues preventing our members from securing their share of the beef dollar, but we must do so in a way that respects the voices of all cattle producers, regardless of how they choose to market their cattle. We thank Mr. Gardiner for his insights, and we thank Chairwoman Stabenow, Ranking Member Boozman, and other Senators on the committee for the investment they’ve demonstrated in the issues facing America’s cattle producers. We appreciate the care taken by both the majority and minority to consult and select a witness panel that can speak to the current market dynamics from multiple angles.”

The hearing today comes on the heels of growing conversation about cattle markets both in Congress and across the country. Earlier this month, NCBA led a letter with the support of 37 affiliate state cattle organizations urging the leadership of the U.S. Senate and House Agriculture Committees to address critical areas of concern in the cattle and beef industry. Multiple lawmakers on both sides of the aisle have written the U.S. Department of Justice calling for the swift conclusion of their investigation into whether or not anticompetitive practices have taken place in the meatpacking sector. NCBA was also at the forefront in 2019 of calling for an investigation after the “black swan” market event of a fire at Tyson Foods’ Finney County beef plant in Holcomb, Kansas.

In his opening remarks, Gardiner confirmed the importance of solutions that put producers in the driver’s seat. “Please do not create regulations and legislation that have the unintended consequence of harming value-based marketing. Doing so would undo many years of progress for producers such as my family and those of our customers,” said Gardiner. “Onerous legislation has the potential to result in a reversal of quality that is simply unacceptable to consumers.”

“Long time critics of the meat and poultry industry are again proposing additional regulations and shortsighted market interventions that do not consider the basic laws of supply and demand. Many of these proposals have already failed in practice or before the courts,” said Meat Institute President and CEO Julie Anna Potts. “The beef market is dynamic, with recent challenges due to labor shortages and the COVID pandemic rather than problems with market structure.

“The members of the Meat Institute – and their livestock suppliers – benefit from, and depend on, a fair, transparent and competitive market. The North American Meat Institute is prepared to discuss these issues and work with the Administration and the Congress on the issues facing the industry.”

The Meat Institute made these remarks in written testimony submitted to the U.S. Senate Committee on Agriculture, Nutrition and Forestry for a hearing entitled, “Examining Markets, Transparency, and Prices from Cattle Producer to Consumer.”

The testimony provides a comprehensive picture of the dynamic and growing beef industry and an analysis of rhetoric surrounding oversight of the market, antitrust issues and the market forces at play.

Of particular interest is a new analysis (pages 8 and 9 of the testimony), using USDA data, of the profit margins of the three sectors of the fed cattle industry: cow-calf producers, feeders and packers. The data show that over the last 25 years, while the four-firm concentration ratio in the fed cattle market has remained relatively constant, it has not ensured packer profitability at the expense of producers.

“No sector – cow-calf, feedlot, nor packer – has realized positive margins every year,” Potts said. “For example, the four-firm ratio in 2014, when cow-calf and feedlot profit margins were at record highs, was the same as in 2017 when all three sectors showed positive margins. However, over this 25-year timeline, the cow-calf sector incurred negative margins the fewest number of years of the three.” 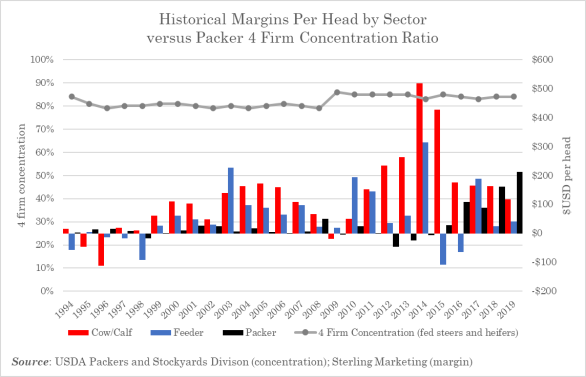 In addressing calls for additional packer capacity as a solution to the challenges due to the COVID pandemic, the testimony demonstrates that packer capacity is already growing as a result of market forces, without government intervention.

“These new entrants or company expansions were based on decisions to build or expand based on market conditions, not because of government intervention.  Government interference into the market could well undermine this industry growth,” said Potts.

“During the pandemic, small and midsize beef slaughter and processing companies endured the same challenges large companies faced, perhaps more so. Artificially creating more, smaller regional harvest facilities will not prevent future market disruptions nor protect cattle producers from cyclical or volatile markets. The unintended outcome could be the opposite.”

On Wednesday the Senate Agriculture Committee held an historic hearing to examine the state of the U.S. meatpacking industry. Titled “Examining Markets, Transparency, and Prices from Cattle Producer to Consumer,” the hearing was the first of its kind in decades and yielded ample evidence of harm to American cattle producers, consumers, and rural communities as a direct result of concentration in the food system.

The witness list included Dr. Mary Hendrickson, Rural Sociologist at the University of Missouri and author of “The Food System: Concentration and Its Impacts,” a report commissioned by Family Farm Action Alliance. Dr. Hendrickson expressed grave concern over the unequal distribution of power in the food system; currently, everyone must abide by decisions handed down from a few transnational agrifood companies’ boards of directors.

With their questions, Committee members displayed a clear interest in the lack of resiliency and transparency of the U.S. agricultural system and a sense of urgency to do something as soon as possible about its unprecedented levels of concentration: for example, just four meatpacking companies control 85% of the market.

“We commend Chairwoman Stabenow and Ranking Member Boozman for calling for this hearing,” said Emily Miller, Research and Policy Manager of Family Farm Action and co-author of the Food System report. “The hearing leaves no doubt that meatpacking monopolies are stealing fair market opportunities from cattle producers, gouging consumers, and putting profit over people. The time for action is now.”

Committee members and witnesses alike mentioned many possible reforms to the political, power, and financial structures that underpin our agricultural system. Among those suggested were checkoff program reforms, introduction of mandatory Country of Origin Labeling requirements, programs to support young and disadvantaged farmers, investment in local and regional food systems, funding for small and local meat processors, the Farm System Reform Act, the Meat Packing Special Investigator Act, the Food and Agribusiness Merger Moratorium and Antitrust Review Act, and meaningful reforms to the Packers and Stockyards Act, such as removing the competitive injury requirement and defining “undue preference” to end preferential treatment.

All of these programs and policies should be advanced without delay. Family Farm Action will continue to work toward dismantling corporate monopoly control over agriculture while advancing policies like these, which will build a more sustainable, inclusive economy.