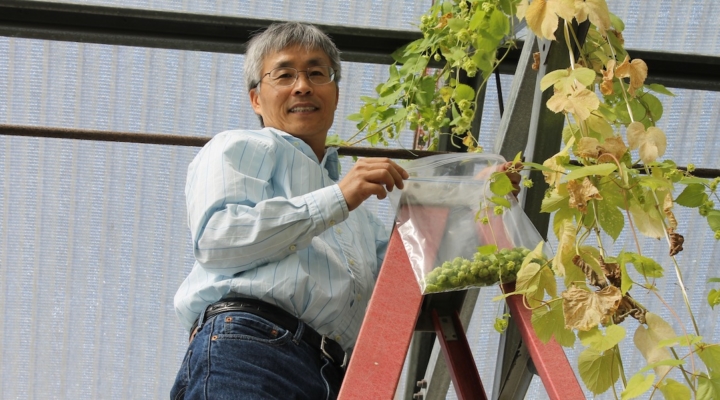 Dr. Deng at work with his hops. (Courtesy Photo)

GAINESVILLE, Fla. — About five years ago, University of Florida environmental horticulture assistant professor Brian Pearson started growing hops in his backyard. Finding success, he and two other UF researchers are exploring whether they can grow the crop for commercial use to help Florida’s micro-brewing industry.

With the help of grants and private financial and in-kind donations, Pearson and UF Institute of Food and Agricultural Sciences researchers Zhanao Deng and Shinsuke Agehara started to grow hops. Pearson is growing hops at the Mid-Florida Research and Education Center in Apopka, Florida, and Deng and Agehara are doing the same at the Gulf Coast Research and Education Center in Balm, Florida.

The UF/IFAS-led hops study includes surveying local craft breweries to see what hops varieties interest them, testing 14 to 20 hops varieties, testing horticultural practices to increase hops yields and testing chemical and sensory qualities – all of which will give researchers a good idea whether the crop is viable in Florida, Deng said.

In addition to examining hop growth and performance, current research efforts are also examining hop quality. Sean Kryger, a former graduate student of the UF/IFAS food science and human nutrition department, recently concluded a sensory evaluation of 12 hop varieties cultivated in Florida during 2017, Pearson said. His research efforts identified several hop cultivars that possessed highly favorable chemical and sensory characteristics. In addition to this work, current research efforts are focused on the influence of post-harvest drying of hops and its influence on hop chemical and sensory quality, Pearson said.

Also, a new study by Agehara is investigating the manipulation of photoperiod using LED lights to create the optimum daylight environments for hops production. Having more than 15 hours of daylight during the early season is critical to maximize the growth of hop plants, while preventing immature flowering. So far, artificial daylight manipulation shows promising results to stimulate such growth, said Agehara, an assistant professor of horticultural sciences.

According to statistics from www.brewersassociation.org, there were 195 craft brewers in Florida in 2016, and their economic impact was $3.074 billion. They produced 1.25 million barrels in 2016.

At last week’s Flavors of Florida in Gainesville, some dishes were prepared using these crops.

Deng is also trying to grow pomegranates at the GCREC.

“The Florida pomegranate association has been very supportive of our project and helped secure funding and materials and supplies,” he said.

Deng also breeds blackberries for Florida growers and consumers. His goal is to develop new cultivars that are well adapted to Florida’s growing conditions and can produce high-quality berries. Coastal Varieties Management provides a significant amount of funding for Deng’s blackberry breeding work.

“Michael has invested a lot of time in the effort of cataloguing olive trees and farms in Florida and getting people and UF/IFAS to the table regarding this alternative crop,” Bosques-Mendez said. “He was instrumental in pushing the first experimental crops in the ground, three of which I was personally involved in.”

“He has invested considerable time into meeting with decision makers, researchers, industry leaders and growers in the hopes of finding a variety that is appropriate for our climatic conditions,” Bosques-Mendez said. “He has done this without expecting anything in return.”

Phillip Rucks Nursery and Agristarts Nursery have donated rootstock liners to propagate peaches from the breeding program, Chaparro said. These liners are used to propagate new selections and to establish tests with cooperating growers. Florida growers provide field space and tree care to allow the evaluation of advanced peach scion and rootstock selections under commercial conditions.

The UF/IFAS peach program also benefits from long-term research associations with Royal, based in Sevilla, Spain and Domaines Benzit in Morocco.  These cooperators evaluate the performance of UF/IFAS cultivars and selections in Mediterranean type climates.  This provides an accurate measure of their performance relative to exotic germplasm.

“The donors are an integral part of the UF/IFAS fruit tree-breeding program,” Chaparro said. “They provide invaluable feedback on industry trends and needs and provide support that allows us to do a better job at delivering competitive commercial cultivars.”

When Folta thinks of models for emerging crops, he goes back to the blueberry, which started with minimal acreage in the 1970s and is now a huge industry in Florida. According to a 2015 report from the U.S. Department of Agriculture, the value of Florida’s blueberry crop was about $84 million a year in Florida.

“That’s because UF/IFAS breeders found ways to breed new varieties that work in Florida,” Folta said. “The difference is that today, we have gene-editing tools that allow scientists to create the traits they want in a much faster time frame. That’s great, because we can maybe adapt existing varieties for Florida or maybe domesticate the plants that thrive in Florida.” 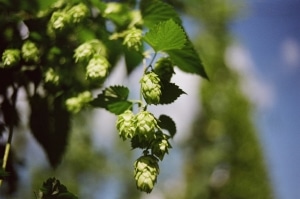 CORVALLIS, Ore. – Hops of the same variety grown in Oregon and Washington and beers brewed with those hops have different chemical properties and aroma profiles, a new Oregon State University study found. Demand for hops has surged in recent years as the craft beer industry has grown, fueled in part by hop-forward beers, such as India pale […]

YANKTON, S.D. — The 2021 season has been challenging for many farmers due to drought. For South Dakota hop growers, the conditions are nearly ideal this year. Hops require a great deal of water due to their growth rate, with the greatest need in late June and early July. Most hop farmers irrigate their hops […] 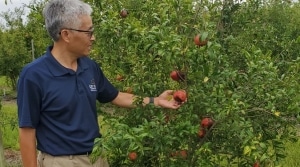 UF/IFAS plows forward to breed and grow a ‘superfood,’ the pomegranate

GAINESVILLE, Fla. — Pomegranates are sweet, juicy and one day they could grow abundantly in Florida. They taste good, and they’re full of nutrients, including antioxidants. “The fruit and its products such as arils and juice are rich in phytochemicals and are considered a ‘superfood,’” said Zhanao Deng, a University of Florida environmental horticulture professor […]