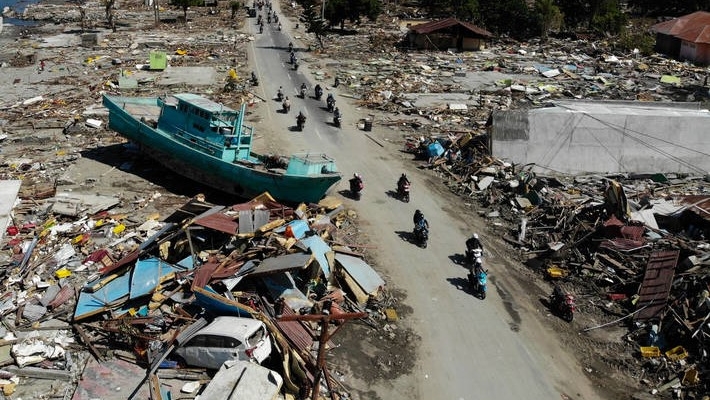 People drive past a washed up boat and collapsed buildings in Palu, Indonesia, after an earthquake and tsunami hit the area on 28 September. (FAO)

ROME — The UN’s Food and Agriculture Organization (FAO) has launched a recovery programme to help more than 70 000 Indonesian farmers and fishers grow food and fish again following a series of disasters that just over a month ago devastated their livelihoods. The country’s deadliest earthquake in more than a decade, a tsunami and then landslides wracked havoc on people’s homes and lands, and caused widespread loss of life and displacement.

Over the next three months, FAO aims to reach 50 000 farmers with vegetable seeds, fertilizers and small hand tools, such as shovels and hoes. A further 20 000 fishers will receive fishing equipment kits. The families live in areas that were hardest hit by the disasters – Donggala, Sigi, Palu and Parigi Moutong in Central Sulawesi Province.

FAO is also setting up a cash assistance scheme to specifically support 4 000 pregnant women and mothers with children under five years old to enable them to access the nutritious food they need.

“Families in Central Sulawesi highly depend on farming and fishing. For most, this is their only source of food and income. Now this has been taken away from them. They lost their crops and their means to grow or access food again – their farming tools, seeds, and fishing gears,” said Stephen Rudgard, FAO Representative in Indonesia.

“We know that many people in Indonesia have been through this before and are resilient. But it’s important that FAO steps in to support the Government’s efforts to help the people of Central Sulawesi recover now. This way they can restore their food production as quickly as possible and avoid more hunger and suffering down the line,” added Rudgard.

The agriculture and the fishing sectors have suffered severe damage, but FAO fears that the extent of damage is higher, with figures expected to rise once a thorough assessment is carried out.

To date, it is estimated that nearly 10 000 hectares of agricultural land has been damaged, with rice and maize crops being most affected. The loss of vegetable production is also estimated to be particularly high. In Sigi District, damage to the main irrigation system has cut off water supply to over 8 000 hectares of farming land and aquaculture area.

There is a high risk of further crop losses due to reduced agricultural labour, loss of stored agricultural supplies and limited access to seeds, fertilizers, tools and irrigation.

FAO has been supporting Indonesian people for nearly 70 years with a number of programmes to boost and stabilize food production and supply.