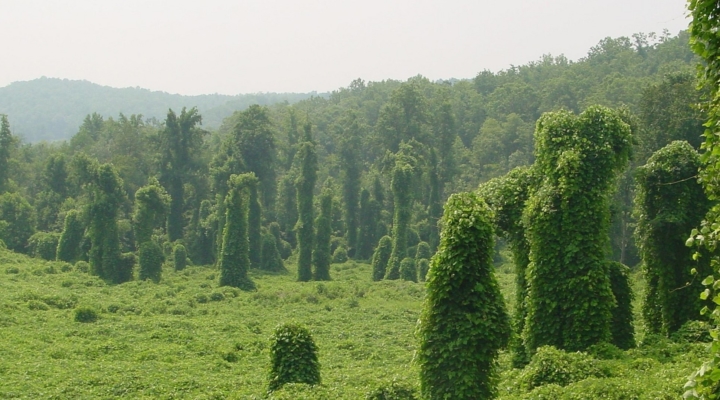 According to the U.S. Fish and Wildlife Service, there are approximately 4,300 invasive species in the U.S. alone. Above: Kudzu. (U.S. Department of Agriculture, Flickr/Creative Commons)

DARTMOUTH, Mass. — As invasive species are threatening ecological habitats throughout the U.S. and Canada, the role of Indigenous nations as environmental stewards has often been overlooked, according to a Dartmouth-led study published in the current issue of American Indian Quarterly. (A pdf is available upon request).

Past literature has often focused on the sociocultural impact of invasive species on Indigenous peoples, rather than reflecting their knowledge, scientific research and initiatives underway to address invasive species and environmental change, more broadly. As part of their findings, the researchers also aim to help provide a counter-narrative to Indigenous peoples being helpless victims of environmental change.

Through an online survey of over 140 Indigenous respondents, who work in national resource, environmental and cultural departments, the study revealed how the majority consider invasive species a topic of great concern to their community. Environmental, cultural and economic issues were found to be the three areas of concern by priority. Seventy-six percent of the respondents indicated that they were very concerned about specific plant and animal populations, 62 percent are very concerned about the impacts of invasive species on local food systems and traditional economic knowledge; and 53 percent are very concerned about impacts on cultural identity. One Quinault Indian Nation representative explained how infestations of knotweed in the riparian habitat of the Quinault River and its watershed could threaten Quinault salmon fisheries and deer. Salmon is considered a “cornerstone of who the Quinault people” are. The survey results provide examples of the many ways Indigenous nations are adapting to invasive species, documenting their impact and implementing active response strategies.

To keep established invasive species at bay, Indigenous nations are using public programs to educate community members and are using methods based on both Western science and Indigenous knowledge systems. These include removing invasive species by hand, and drawing on mechanical and chemical methods. The Native organization, the Chugachmiut, reported that they are researching areas where berries have been most resistant to defoliation by geometrid moths to help target their treatments.

Although 81 percent of respondents reported that they have coordinated with non-Indigenous governments, and non-governmental and non-profits organizations on invasive species, many indicated that communication could have been better, to ensure that they are immediately informed of new invasive species and that they have an opportunity to collaborate on potential next steps from the onset.

According to the U.S. Fish and Wildlife Service, there are approximately 4,300 invasive species in the U.S. alone.

“Our study shows that Indigenous nations in the U.S. and Canada are responding to invasive species in some of the same ways as non-Indigenous governments, but that they also bring unique knowledge and approaches to bear on these challenging issues,” says Nicholas J. Reo, an assistant professor of environmental studies and Native American studies at Dartmouth, who served as the first author of the study. “Invasive species have no borders, making this a challenge that we, as a society must face together,” adds Reo.

Sustainable irrigation may harm other goals