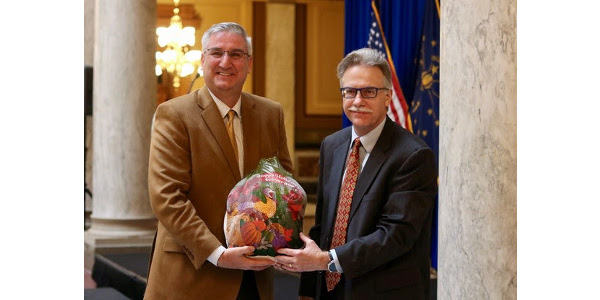 INDIANAPOLIS — More than 75 tons, or 150,000 pounds, of poultry products were donated to families in need ahead of the holiday season, announced today by the Indiana State Poultry Association (ISPA). Governor Eric J. Holcomb and Indiana State Department of Agriculture Director Bruce Kettler recognized the generosity of these producers at the association’s 71st annual poultry donation.

“Indiana’s poultry producers are remarkable,” Holcomb said. “Year after year, they provide thousands of meals for Hoosiers in need. I commend their goodwill and encourage others to follow their example this holiday season.”

For decades, Indiana’s poultry producers have been working to address food insecurity in their communities by providing protein to food banks across the state. Some of the main products that were donated this year include eggs, chicken, duck and turkey.

In fact, more than 600,000 eggs were donated by members of the association, according to Paul Brennan, ISPA Executive Vice President.

“It was an honor to recognize these producers, who are leaders in the industry and community-oriented,” Kettler said. “They are important to our state’s social and economic well-being, and I applaud their generosity, as well as Paul’s leadership of the association.”

The strength of Indiana’s poultry sector was also recognized during the ceremony, as one of the top poultry producing states in the nation. According to the USDA National Agricultural Statistics Service, Indiana ranks No. 1 in duck production, No. 2 in egg production and No. 3 in turkeys raised.

Annually, the poultry sector contributes more than $9.5 billion to the state’s economy and accounts for more than 11,000 Hoosier jobs.

“Indiana’s poultry industry is large and diverse, and it is no accident,” Brennan said. “Geographically we may be the smallest state west of the Appalachian mountains, but we are an agrarian powerhouse with cropland for soybeans and corn. Our family farmers excel at efficiently turning those crops into high quality protein eggs, turkey, duck and chicken.”

Products displayed during the annual poultry donation were donated to Gleaners Food Bank of Indiana.

Sugar producers ‘have our backs’ amid pandemic
April 19, 2020