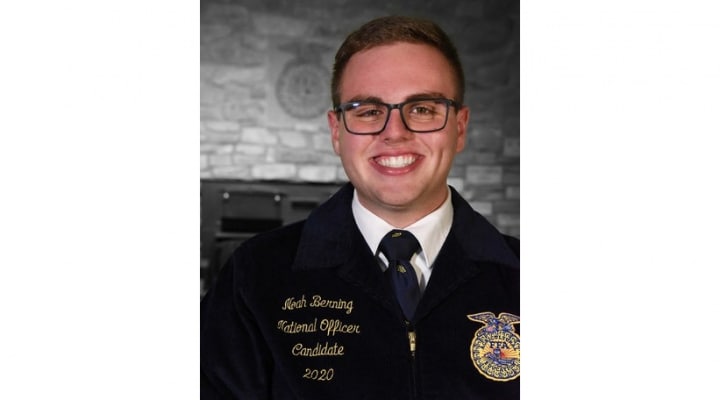 INDIANAPOLIS — Noah Berning will soon be vying for one of the six National FFA Officer positions. In the running are 38 of the United States’ most elite young agriculture leaders.

Berning was selected by a state nomination committee to serve as the National FFA Officer candidate on behalf of Indiana.

“Indiana FFA is an exceptional youth organization that is developing strong leaders and agriculturists,” said Indiana State Department of Agriculture Director Bruce Kettler. “I truly admire Noah’s ambition to serve not only the state of Indiana but all of the United States, Puerto Rico and the Virgin Islands. Best of luck, Noah!”

Berning was an active member of the Heritage FFA Chapter in Monroeville where he competed in many contests ranging from welding to ag sales. Notably, Noah placed as a gold individual at the national farm business management contest at the 2019 National FFA Convention. He is now a Freshman at Purdue University double majoring in Ag Systems Management and Agriculture Economics. Since arriving at Purdue in August, he has participated in the Purdue Grand Prix Junior Board, Agronomy Club, Collegiate Farm Bureau and became a member of Farmhouse Fraternity.

Over the last few months, Berning has been preparing for the intense interview process that will be taking place entirely in a virtual format this year.

“I know that I didn’t make it here alone,” Berning said. “I am honored to have the opportunity to represent the state of Indiana and all of those who have invested in me. I look forward to making many connections along this journey.”

In order to be considered, candidates must complete a two-phase interview process. If they pass the first phase, which consists of four rounds and eliminates 50% of the candidates, they will be tested in round-robin conversations, media interviews with stakeholders and their ability to lead a classroom discussion, as part of the second phase.

The newly selected National FFA Officers will be announced on Oct. 29, during the final session of the 2020 National FFA Convention and Expo.

For more information about the National FFA Organization visit ffa.org or inffa.org to learn more about the Indiana FFA Association.