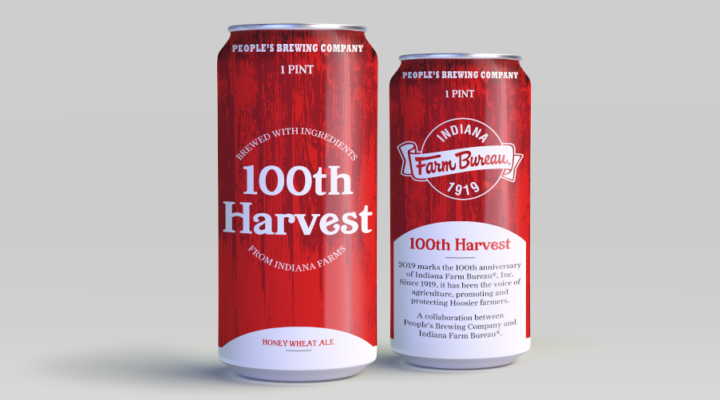 100th Harvest is a honey wheat ale that is sure to appeal to a wide range of palates. All ingredients used to brew 100th Harvest came from Indiana farms that are owned by Farm Bureau members. The honey was supplied by RJ Honey and the malt from Sugar Creek Malt Company, both of Lebanon, Ind., while the hops came from Pines Farm Hops Farm in West Point, Ind.

A portion of the proceeds from the sale of 100th Harvest will benefit the Farm Bureau Foundation.

“100th Harvest is the perfect way for Farm Bureau to celebrate its 100th anniversary while making that important connection between farmers, Indiana agriculture and a good craft beer,” said Debra DeCourcy, chief marketing director for INFB. “By launching our beer at the state fair, we will be able to showcase our farmers’ quality ingredients in a product that many may not initially think of as agricultural.”

During the Indiana State Fair, 100th Harvest will be available on tap in the Beer Garden. Additionally, People’s Brewing Company will distribute a limited quantity of canned packages of 100th Harvest throughout the state. Chris Johnson, president and co-owner of People’s Brewing Company, said it has been an honor to work with Indiana Farm Bureau and help with the celebration of the organization’s 100th anniversary.

“Everybody we contacted was really excited to be a part of 100th Harvest and get their ingredients that they grew in Indiana on the ticket for the beer,” said Chris Johnson, president and co-owner of People’s Brewing Company. “Agriculture is a huge part of the brewing industry. It’s just awesome to have local Indiana farmers growing ingredients for local Indiana brewers.”

The release of 100th Harvest is one part of INFB’s centennial celebration, which began during the INFB state convention in Fort Wayne, Indiana last December. Other activities have included a celebration of the founding of INFB at the Statehouse and a charitable giving campaign called “100 Pounds for 100 Years.”

The event at the Statehouse took place on the date of INFB’s founding, March 25, and a proclamation was issued declaring March 25, 2019 as “Indiana Farm Bureau Day.” Through the “100 Pounds for 100 Years” initiative, INFB and its county Farm Bureaus across the state donated more than 50 tons of food to more than 90 charities across Indiana.

“This year, we’re taking every opportunity to celebrate Indiana Farm Bureau’s commitment to agriculture and rural communities, a commitment that has resulted in 100 years of supporting agriculture,” DeCourcy said. “We invite you to join us in that celebration and look for 100th Harvest when you visit the state fair this year.”