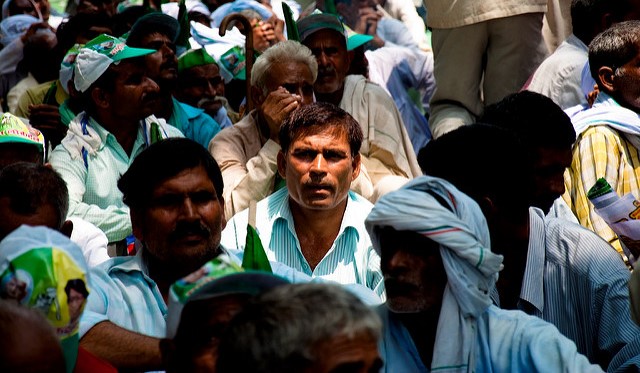 NEW DELHI (AP) — Thousands of farmers marched to India’s Parliament on Friday demanding higher prices for their produce and a government waiver on their farm loans to alleviate hardships.

Waving red, yellow and green flags and banners representing their organizations, the protesters also called for lower prices for diesel fuel and fertilizer and blamed the Hindu nationalist government for hardships caused by years of declining earnings in the agriculture sector.

Several farmers carried human skulls they said were of farmers who had killed themselves due to deep debt. Their widows also joined the march.

A handful of angry farmers took off their clothes and lay naked on the road before they were persuaded by their leaders to put their clothes back on.

The farmers demanded a special session of Parliament to discuss their demands. Police stopped them at Jantar Mantar, the main area for protests close to Parliament in New Delhi.

They carried banners accusing Prime Minister Narendra Modi’s government of not fulfilling its promise to ensure they earn at least one and a half times the costs they incur in producing their crops. They demanded that the federal government increase the minimum support prices it sets to protect farmers from sudden slumps in market prices. It is the rate at which the government buys farm produce when there are no other buyers in the market.

Dinesh Kumar, 39, a farmer from northern Uttar Pradesh state, said Modi had promised to write off the farmers’ debts. “The entire country’s farmers stood with him because of this promise. Today, we have come here to wake him up. If he listens to what we have to say, then Modi will stay (as prime minister), otherwise the farmers of this country will replace him.”

National elections are due to be held early next year.

Rain-dependent agriculture employs more than half of India’s 1.3 billion people, but shrinking earnings mean it now accounts for only 15 percent of India’s economy.

Failed harvests force poor farmers to borrow money at high interest rates to buy seeds, fertilizer and food for their cattle. They often mortgage their land and, as debts mount, some are driven to suicide.

M.S. Swaminathan, a prominent agricultural scientist, supported the farmers agitating over the lack of attention given to them.

“Evidence of agrarian unrest has been growing and farmers have come to the conclusion that only agitation and not reasoning will lead to action on their problems,” he said in a statement.