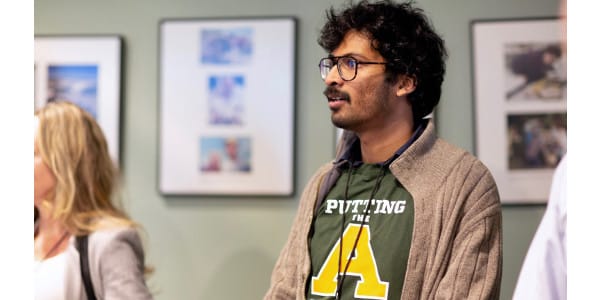 DENVER — “There is always something that binds us — and that is food and the land,” said Kate Greenberg, commissioner of Colorado’s Department of Agriculture, upon welcoming attendees to Colorado State University’s inaugural Colorado Food Summit on Jan. 7 in Denver.

The sold-out Summit drew more than 300 attendees from across Colorado, and included conversations resembling those that will happen at CSU System’s future Spur campus at the National Western Center.

“We might face different challenges today than we did 100 years ago, but we’ve had a tenacity and perseverance in agriculture that lives on today and carries us forward,” Greenberg continued.

The Summit’s mission, “to build linkages that meet diverse urban food goals while creating viable market opportunities that build wealth for Colorado farmers and ranchers and rural communities,” was carried out through 11 sessions focusing on a range of topics – from scaling up farm-to-institution strategies to strengthening direct-to-consumer outlets, and developing a 2050 vision for Colorado’s food systems.

The agenda also included a “market speed dating” session, in which nearly 30 food purchasers and producers were given time to meet and explore potential opportunities to collaborate.

The Summit is part of a CSU Food Systems Initiative grant, in conjunction with Summit partners, to understand what types of urban food policies, programs, and initiatives meet urban goals while also supporting farmers, ranchers, regional communities, and economies. The research and Extension effort is funded by the Foundation for Food and Agriculture Research, CSU’s Office of the Vice President for Research, Colorado Potato Administrative Committee, Colorado Wheat Research Foundation, CSU’s Agricultural Experiment Station, and many others.

“Our CSU Food Systems team has been working for several years with more than 30 partners to foster linkages across diverse food system actors,” said Becca Jablonski, assistant professor and food systems Extension economist with the Department of Agricultural and Resource Economics, who organized the event with support from other CSU Food Systems faculty, staff, and students.

While Jablonski and the CSU Food Systems Initiative have held several regional meetings focused on convening key stakeholders in food and agriculture over the past few years, she referred to the inaugural Summit as the group’s “first attempt at bringing together statewide actors.”

Pratyoosh Kashyap, one of Jablonski’s graduate students who recently completed the first semester of his Ph.D. in agricultural economics at CSU, volunteered to support the event.

Prior to enrolling at CSU, Kashyap conducted research on small community farms with a research organization in India, where he developed a particular interest in localized food production. He found value in the Summit’s focus on supporting small-scale producers, and recognized shared challenges for U.S. and Indian farmers.

“The agriculture is completely different in the two countries, but the issues are similar,” he said. “[This Summit] has been a good platform to see how the people involved are communicating, what each of them have to think and say about the issues, and what they’re all doing.”

Two of the event’s sessions had direct ties to CSU System’s Spur campus at the National Western Center, slated to break ground this year and open in 2022.

Three buildings will comprise the Spur campus, focusing on food, water, and human and animal health.

“We see the National Western Center as being a vitally important aggregator and hub – a platform, as well as a place – both physically and virtually, where there can be commerce exchange and intellectual property exchange, and education year-round,” said Brad Buchanan, CEO of the National Western Center Authority, during an afternoon session on exploring expanded wholesale markets in Denver.

CSU System’s Spur campus will be part of the larger, 250-acre redevelopment project  on the existing grounds of the historic National Western Stock Show.

Many of the existing buildings will be replaced with newer facilities, but Buchanan and his team – along with the City and County of Denver – are working on plans to restore the original 1909 Stadium Arena into a year-round public market, which he sees as “the heartbeat of the National Western Center.”

“In 10 years, this market will be the Denver destination,” he said. “It’s going to be how people think about Larimer Square and the 16th Street Mall, and I think it can really play an important role in changing the landscape of the food connectivity – or lack thereof – in Colorado.”

Roughly 80 Summit attendees joined the session and were divided into smaller groups charged with creating a shared 2050 vision for Colorado’s food systems.

At the end of the exercise, the National Western Center team collected participants’ worksheets to incorporate into a submission to the Rockefeller Foundation’s Food System Vision Prize, which invites organizations from around the world to create compelling and progressive visions of the world’s food system by 2050 for a chance to win a portion of the $2 million prize.

“Convenings like the Colorado Food Summit play a crucial role in bringing together diverse stakeholders to identify and address the most pressing issues facing our state, region, and world,” said Hittle. “These conversations are especially valuable for the many partners contributing to the programs and research that will take place at Spur.”

Jablonski, who will be actively involved with programming at Spur’s Center for Food & Agriculture, shares a similar hope for CSU’s involvement with the new campus.

“Once built, we are confident that the NWC will play a key role in fostering these conversations and supporting a collective vision for our food system into the future,” she said.

The Spur groundbreaking ceremony will be held at the National Western Center site on April 30, 2020. More details to be announced at nwc.colostate.edu.

About Spur: CSU System at the National Western Center

Coming in 2022: CSU System will open Spur, where innovative ideas and unforgettable experiences come to life at the National Western Center. Spur’s three buildings at the center of the landmark project in north Denver will engage all learners and fuel new solutions around water, food, and health – creating impact on our lives and our world. Spur is where learning is open and accessible to all. Where researchers tackle the world’s most pressing problems around water, food, and health. Where art and culture challenge and surround you. Where rural and urban, local and global intersect. Learn more at nwc.colostate.edu.

Food systems are the connections between natural resources, the agricultural and food industries, and the buyers, consumers, and communities to which they contribute. Research, extension and education identify and inform opportunities to bridge how production, supply chains, and eaters respond to changing markets, policy, and the environment. At CSU, we focus on these key areas to train, influence, and communicate ways to connect food-related roles and foster healthy communities, economies, and individuals. For more information, visit foodsystems.colostate.edu.

Using dogs to sniff out the bad guys