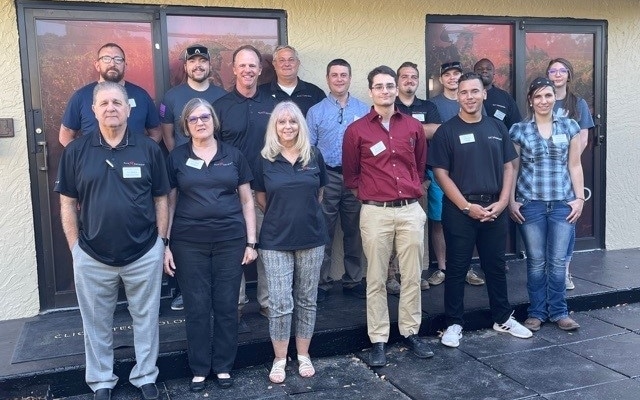 ClicRtechnologies held its first-ever Exposition on May 20, 2021, demonstrating its revolutionary scaleless livestock weight and data management system at the Double C Bar Ranch in Kenansville, Fla. A pinnacle team meeting was held the next day, marking the very first gathering of the company’s employees from across the nation. (photo provided)

TAMPA BAY  — ClicRtechnologies held its first-ever Exposition on May 20, 2021, demonstrating its revolutionary scaleless livestock weight and data management system at the Double C Bar Ranch in Kenansville, Fla. A pinnacle team meeting was held the next day, marking the very first gathering of the company’s employees from across the nation.

“ClicRtechnologies is laser-focused on bringing the ag industries into the 21st century,” said President Joey Spicola, “using never before seen technology and creating the digital ranch.”

About 30 attendees gathered for a luncheon and presentation by Spicola and other ClicRtechnologies team members. Among those in attendance were representatives from Florida Senator Marco Rubio’s office, guests from the University of Florida’s Beef Teaching Unit and Abraham Baldwin Agricultura College (ABAC). Recently ABAC partnered with ClicRtechnologies and American Cattlemen magazine to produce a series of articles after the company donated $40,000 along with three weighing systems for the school’s cattle operations.

After the luncheon, all attendees had the opportunity to view the ClicRweight Bovine Solution for themselves at work in one of Double C Bar’s pastures. The system is set up in a simple pole barn around the water source. An RFID ear tag is scanned whenever an animal goes to drink and a camera instantly begins “clicking” hundreds of 3D photographs. That data is immediately processed into a weight, which can be viewed with a digital dashboard made accessible through any device with connection to the internet.

Over time, the system continues to learn each animal, providing the herd’s valuable information including daily rate of gain, weight average and feed efficiency. The ClicRweight Bovine Solution has been in place on the Double C Bar Ranch since early March. Joe Planz, a ClicRtechnologies board member and investor, grazes some of his cattle herd on the ranch.

“Grazing our calves two and half hours away from the main ranch,” he says, “ClicR enables us to have a constant analysis of how the calves are doing in real-time and enables us to address any issues expediently and proactively.”

The next day, the ClicRtechnologies team gathered in the company’s new International headquarters in Tampa. The team discussed plans for company growth in the near future and progress made over the last 12 months.

“One of the benefits of our system is that it can be totally managed from anywhere in the world,” said Spicola.

In addition to cattle, ClicRtechnologies also has solutions for weighing swine and alligators. To learn more, visit the company website: https://clicrweight.com.

ClicRtechnologies is a company revolutionizing the agricultural industry through unique means of scaleless weighing and data management. They are committed to the development of proprietary technology to enhance the lives of its users by providing the most advanced vision software with unparalleled expertise in 3D imaging. The company remains focused on the expansion of our weight capture technology and the development of future applications that will deliver cutting-edge solutions to increase production efficiency across multiple industries.

Headed to any conferences this Summer?