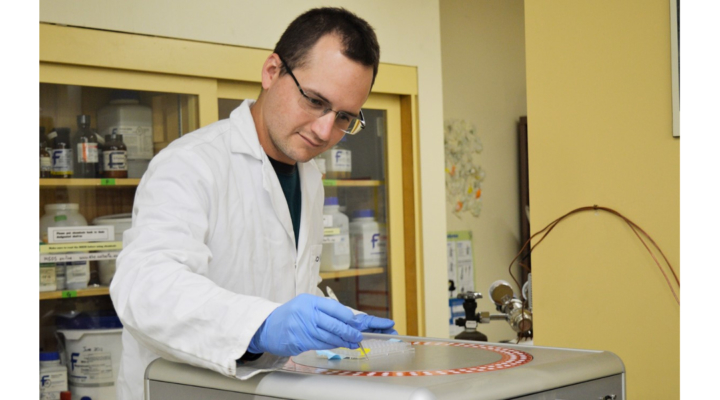 Gross prepares to place a tin of soil in the slot of an elemental analyzer for analysis. (Photo credit Dauren Kaliaskar)

WASHINGTON — A (wo)man is only as good as his or her tools. In the case of soil scientists, they are only as good as the tools and methods they use. And when it comes to estimating soil organic carbon stocks, new research shows not all tools give the same results.

Soil organic carbon stocks are the amount of organic carbon found in soil. There are several common ways of measuring these stocks. Until now they were all believed to give pretty much the same results. Cole Gross, a graduate student in the Department of Renewable Resources at the University of Alberta, questioned this commonly-held assumption.

Gross explains that all organic materials found in soils are in some way from a living thing, such as decomposing plants and animals. This type of material is known as soil organic matter and about half of its mass is carbon. The amount of soil organic carbon differs from soil to soil, location to location.

Three measurements commonly used are clod, core, and excavation. For the clod method, a scientist takes a clod of soil from the surface or another specific depth and takes it to the lab for chemical analysis. The core method uses a hollow tube to pull a core of soil from a specific depth for analysis. The excavation method is the least common of the three, as it requires the most time and labor. However, it is considered the most accurate of the methods. It involves digging a large pit to get at a large amount of soil.

Although many believe the results of these three methods are similar, Gross found many key differences. He and his team found that the most commonly used method, the core method, greatly underestimated the soil organic carbon stock. Most of this difference occurred in soil deeper than 20 centimeters (just under 8 inches), which Gross says holds most of the soil organic carbon stock.

“Our results suggest that regional and global soil organic carbon stocks may be largely underestimated due to shallow sampling and the frequent use of core methods,” he explains. “We found that these common soil sampling methods gave significantly different results and should not be assumed to be interchangeable.”

Gross explains that the tools and methods soil scientists use are as important, if not more important, than the data they provide.

“For much of the work that we do, small errors in the first steps of a long process can amplify later in the process,” he says. “It is always important to look back and check assumptions and the accuracy of methods, even if these methods have been accepted for a long time.”

Based on the research team’s findings, Gross recommends that the potential for the core method to underestimate soil mass be determined in a given soil and then adjusted to account for this. Additionally, they found that the clod method can be used as a standard reference for soil mass measurements in non-rocky soils.

“The inspiration behind this study was a bit serendipitous,” he says. “As a fairly new soil scientist, when the soil sampling core I was using broke in the field, I was instructed to use the clod method and told that the methods were interchangeable. This seemed curious to me and inspired my research into different soil sampling methods, which ultimately led to this study.”

Read more about this work in the Soil Science Society of America Journal. This research was funded by the University of Washington Stand Management Cooperative.