Home » In Kentucky farming is a way of life
agritourism marketing 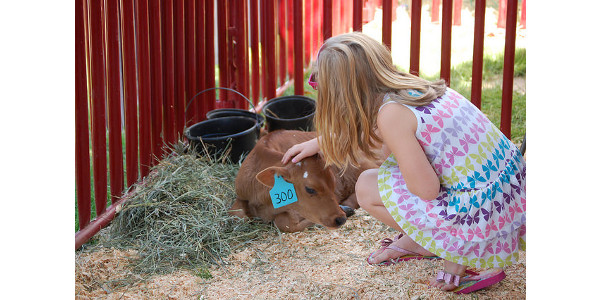 Kentucky's farmers are becoming tour guides, opening their properties to meet demand from people who want to know how their food is made and who will pay the farmers to see it. (City of Greeley via Flickr)

GOSHEN, Ky. (AP) — Subdivisions dot the path to the historic Hermitage Farm, providing a glimpse of what its land could look like had it been approved for development back in 2002.

Haviland Argo has seen the plans — with hundreds of homes splitting up the 700-acre property into much tinier plots.

It’s a sad thought for the architect who grew up on a Northern Kentucky farm, who knows that the state’s farmland continues to be in danger and who’s now responsible for turning Hermitage back into a viable operation that will keep it out of harm’s way.
Argo isn’t alone in the endeavor.

The reason for many farm closures is simple: The owner couldn’t make ends meet.

But at farms that have managed to hold on, a common change is taking place. The businesses are becoming two-fold, adding new operations that can help fund the owners’ original ventures.

Specifically, Kentucky’s farmers are becoming tour guides, opening their properties to meet demand from people who want to know how their food is made and who will pay the farmers to see it.

It’s a business called agritourism, and it’s increasingly been discussed as a way to save the family farms that have long made Kentucky — Kentucky.

“It provides farmers with another avenue and more income to possibly stay on the farm that’s been in their family for generations,” said Sharon Spencer, director of the direct farm marketing division for the Kentucky Department of Agriculture.

According to the U.S. Census of Agriculture, the number of Kentucky farms with agritourism opportunities rose from 428 in 2007 to 651 in 2012, pulling in more than $7 million in profits in the latter year.

Those numbers will likely be even higher when the next census is released, as more farms jump on the trend.

Mattingly Dairy Farm, home to Kenny’s Farmhouse Cheese, is already on the list of agritourism sites in Kentucky but is planning to expand visitor opportunities this summer.

The farm is located in Barren County, “the middle of nowhere,” and currently offers informal tours as well as an observational area for its creamery, said Van Campbell, director of sales.

Soon, the farm will also start inviting guests to stay the night above its dairy parlor and witness its milking operations firsthand.
The farm is currently finishing up several Airbnb-style guest rooms and an observation deck in its dairy barn, where viewers can watch cows use new robotic milkers — equipment that allows the animals to be milked when they’re ready, Campbell said.

“We’ve already seen a huge improvement in the milk production of the herd and also the mood of the cows; they’re a lot calmer,” Campbell said. “… It’s sort of mesmerizing and fascinating to watch it happen.”

Campbell said expanding the farm’s tourism isn’t about selling more cheese, but is instead meant to educate guests about what goes into the food’s production.

“I think it just boils down to people want to know where their food comes from, more and more every day,” Campbell said. “You can get online and figure that out, but actually going to the source is important to people, and I think that when you’re actually there experiencing it, smelling it, tasting it, it gives you an understanding on a greater level.”

Hermitage farm owners Steve Wilson and Laura Lee Brown — the couple behind the boutique 21c Museum Hotels and nearby Woodland Farm — plan to create an experience that will highlight three Kentucky cultural influencers: horses, bourbon and food.
Now, Argo is deep in the process of organizing companies and vendors that can help him bring the owners’ vision to life by Derby 2019.

Hermitage Farm was founded before the turn of the 20th century but became known for horse breeding after 1935 when Warner L. Jones Jr. purchased the property.

The farm has continued the horse operation since — breeding winners of the Kentucky Derby, Kentucky Oaks and the Breeders’ Cup in years past. But the business alone no longer brings in enough revenue to keep the farm open, Argo said, which is why Wilson and Brown want to add tourism elements that can highlight and support it.

“The farm employees, their lives are inextricably linked to the horses, and I think we just want to show people that,” Argo said.
Tentative plans for tourism components include a farm-to-table restaurant; a garden to provide produce for the restaurant; an art walk along the property’s creek; a bourbon experience with samples from Kentucky distilleries; a country store selling Kentucky-made products; and, of course, tours of the horse barns.

Argo calls the set-up a “build your own adventure,” with docents stationed at various stops to provide as much information as guests would like.

“There’s always something to learn,” Argo said. “… It’s one of those places where you could spend as little or as long as you want, but there will be something different to see the next time you come.”

Argo said Wilson and Brown plan to make the tours as affordable as possible, and they’re adamant about keeping everything authentic, about honoring the land’s heritage and the state’s culture as a whole.

“There’s something grander about it, about knowing the life cycle and the seasons, the interaction between humans and animals and plants that a farm has; this whole kind of cycle of life,” Argo said. “This really ties all those together. It’s healthy and it just gives you a bigger perspective on life and the cycles of life. There’s something not spiritual, but close to it, that I think is of real value to people.”

— Bailey Loosemore, The Courier-Journal via The Associated Press