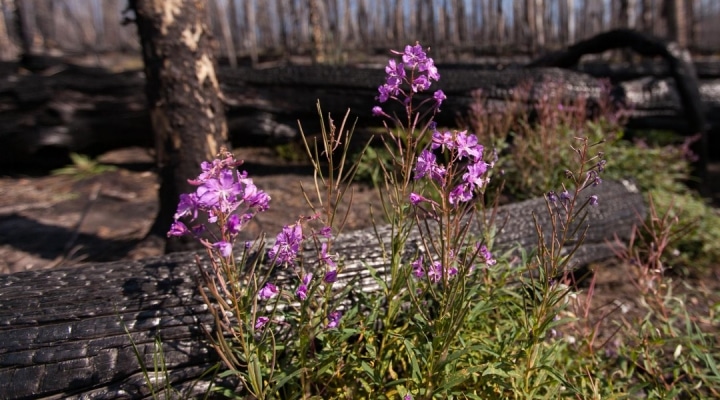 ST. LOUIS — 2020 is the worst fire year on record in the United States, with nearly 13 million acres burned, 14,000 structures destroyed and an estimated $3 billion spent on fire suppression — and counting. At the same time, certain land managers have invested huge amounts of time and resources toward restoring fire through “controlled burn” approaches.

In the face of heartbreaking losses, effort and expense, scientists are still grappling with some of the most basic questions about how fire influences interactions between plants and animals in the natural world.

A new study grounded in the northern Rockies explores the role of fire in the finely tuned dance between plants and their pollinators. Published Nov. 25 in the Journal of Ecology, the findings from researchers at Washington University in St. Louis, Marquette University, Montana State University and The Wilderness Society are particularly significant in light of recent reports about the rapid and widespread decline of insects globally.

“A large number of studies have looked at how fire affects plants, or how fire affects animals. But what is largely understudied is the question of how fire affects both, and about how linkages within those ecological networks might respond to fire disturbance,” said Jonathan Myers, associate professor of biology in Arts & Sciences at Washington University, a co-author of the study.

“Clearly, pollinators perform a valuable ecosystem service for humans by pollinating all our crops. In intact natural ecosystems, they perform an equally valuable service,” said Joseph LaManna, assistant professor of biological sciences at Marquette University, first author of the study. “What we are seeing is that plant and pollinator linkages become even more important in disturbed or burned landscapes. These connections are important for restoring ecosystems in which natural wildfire regimes have been altered or suppressed by human activities.

“And as climate change increases the frequency and intensity of wildfires, the potential for biodiversity loss — for losses of individual plant or pollinator species — is going to be even more profound than we anticipated,” he said.

Wildfire in the northern Rockies can be ignited by lightning — but more and more, it is started by people.

Historically, wildfires tended to burn hot in some spots and cold in others, resulting in a patchwork or mosaic of differing levels of fire disturbance. But with rising global temperatures, the plant debris and other materials that fuel fires are drying out. That trend combined with decades of active fire suppression has resulted in a shift from a majority mixed-severity wildfire regime to today’s high-severity blazes.

For this study, co-author Laura Burkle at Montana State University led the field inventories of plants and pollinators at 152 plots in Montana representing a wildfire gradient including plots with no recent wildfire (unburned), mixed-severity wildfire and high-severity wildfire. LaManna and Myers worked with Burkle and Travis Belote of The Wilderness Society to analyze the data.

At the sites they compared, the scientists found that the number of individual bees, flies and butterflies — and the flowering plants they frequent — were higher in parts of the landscape that had burned, as opposed to those that hadn’t burned.

“Oftentimes, the public perception about fire in general is that it is bad. But it was impressive how much higher the abundances of both plants and pollinators were — as well as the number of species — in the burned landscapes compared with the unburned landscapes,” Myers said.

Leave it to the bees

Although this study shows that fire increased abundances and species diversity of pollinators and flowering plants overall, the intensity of the fire matters. Hotter, high-severity burns can eliminate landscape features that pollinators require, like stumps or woody debris for nesting. Mixed-severity wildfire is most beneficial.

Around the world, pollinator populations are in decline. The northern Rockies are no exception to this troubling trend.

“Thanks to this project, we now have very in-depth knowledge of local pollinator communities, especially the bee communities,” Burkle said. “One of the benefits of these data is to be able to provide expert knowledge about declining pollinator species and species of concern, like the Western Bumble Bee (Bombus occidentalis), which is currently being considered for federal listing under the Endangered Species Act.

“This means that biotic interactions among species are important and will need to be considered more explicitly in conservation actions, like plans for species range shifts with climate change.”

Global climate change is likely to increase the frequency and intensity of wildfires in many other regions — as it has in the mountain West, the researchers said.

The findings from this study suggest that this could possibly result in additional losses of vulnerable species.

Overall, this research advances understanding of how and why wildfire affects conservation, land management and restoration of forest ecosystems. It also shows that ecological models that predict how species will respond under various climate change scenarios also should consider biological interactions within food webs, Myers said.

“By sharing our findings with federal land managers across the region, we hope to contribute to management plans, with the dual aim of maintaining biodiversity of plants and pollinators while restoring environmental complexity representative of historical fire regimes,” Myers said.