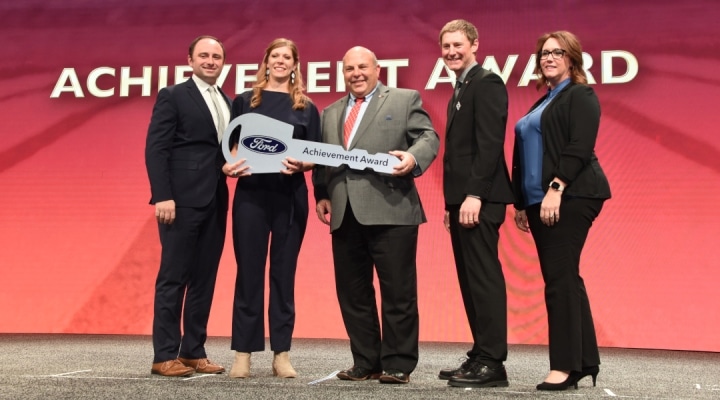 ATLANTA — Winners of the Young Farmers & Ranchers Achievement Award competition were announced Jan. 10 at the American Farm Bureau Federation’s 103rd Convention closing general session. Jacob and Jill Smoker, Indiana Farm Bureau members from LaPorte County, won the award and are now the winners of a new Ford vehicle, courtesy of Ford. In addition, they will receive paid registration to the AFBF Young Farmers & Ranchers Conference, which will be held Feb. 25-28 in Louisville, Kentucky.

“We’re still processing the fact that we’ve been selected for all of this,” exclaimed Jill.

The Achievement Award recognizes young farmers and ranchers who have excelled in their farming or ranching operations and exhibited superior leadership abilities. Participants are evaluated on a combination of their agricultural operation’s growth and financial progress, Farm Bureau leadership and leadership outside of Farm Bureau.

The Smokers got the opportunity to compete at the national level because they won the Indiana Farm Bureau Achievement Award at the annual INFB State Convention in December.

“We’ve had learning sessions the past couple of days with all the contestants for the Achievement Award, and there’s an incredible number of qualified candidates throughout this country,” said Jacob. “It was great to network with them and learn about their operations, as well.”

The Smokers’ family farm consists of a row crop and cattle operation. Jacob manages the day-to-day tasks at Smoker Farms, including crop contracting and overseeing feed truck deliveries, and medical crews. Along with the support of Jake’s father, Jill also helps out by scouting, picking up parts and running equipment. Jill has a full-time job as an art teacher at Chesterton High School, teaching digital design, drawing and jewelry.

“Indiana Farm Bureau is so proud of what Jake and Jill Smoker have accomplished,” said Randy Kron, INFB president. “Their dedication to Indiana agriculture and the hard work they’ve put into their application sets a great example for other young farmers in our state.”

The last time candidates from Indiana won the Achievement Award was in 2008 when Dave and Kelly Ferguson from Jefferson County took home the title.

“Thank you to Indiana Farm Bureau for all the trust they put in us,” added Jacob. “We’re grateful to the county leadership and state leadership that allowed us to compete at this level. It’s something we’ll never forget.”