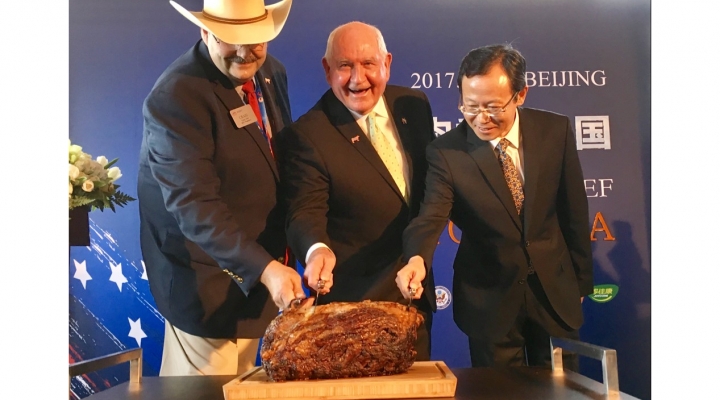 BEIJING — U.S. Secretary of Agriculture Sonny Perdue joined with U.S. Ambassador to China Terry Branstad to slice a Nebraska prime rib in a Beijing ceremony, formally marking the return of U.S. beef to the Chinese market after a 13-year hiatus. Perdue celebrated the reintroduction of American beef products to China after shipments were halted at the end of 2003. The return of U.S. beef and beef products is a part of the U.S.-China 100-Day Action Plan announced by the Trump Administration on May 11, with the first shipment of U.S. beef arriving in China on June 19.

“Beef is a big deal in China and I’m convinced that when the Chinese people get a taste of U.S. beef, they’re going to want more of it. These products coming into China are safe, wholesome, and very delicious. This is also a good harbinger of the kind of relationship that can be developed. We hope there are other things we can cooperate on and we’re going to use U.S. beef as the forerunner.”

President Trump, Commerce Secretary Wilbur Ross, Treasury Secretary Steven T. Mnuchin, officials with the U.S. Trade Representative, and Secretary Perdue announced the deal brokered with China to allow the return of U.S. beef to China in May. China has emerged as a major beef buyer in recent years, with imports increasing from $275 million in 2012 to $2.5 billion in 2016. The United States is the world’s largest beef producer and in 2016 was the world’s fourth-largest exporter, with global sales of more than $5.4 billion.

Earlier in June, the U.S. Department of Agriculture announced the final details of a protocol to allow American companies to begin shipping beef exports to China. To date, producers and processors in Nebraska and Kansas are eligible to ship beef products to China, having followed the requirements set forth in the USDA Export Verification Program and according to USDA’s Food Safety and Inspection Service export requirements. USDA maintains a public list of companies that are eligible, and will continue to update it as more companies complete the export documentation requirements.

Also on Friday, Perdue held a series of meetings with Chinese government officials, including Vice Premier Wang Yang and Minister of Agriculture Han Changfu, to discuss expanding trade between the United States and China.

Following Friday’s events in Beijing, Perdue planned to travel Saturday to Shanghai where he will tour a major Chinese supermarket where other American products are offered.