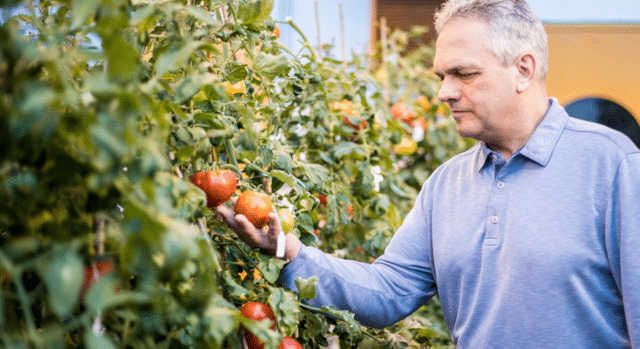 ITHACA, N.Y. — Buying tomatoes and other fruits in the grocery store is always a gamble because, however good they look, they are often firm but lack flavor. A group of plant scientists has discovered a gene that could increase the odds that future store-bought tomatoes stay firm until the consumer gets them home, and have the right combination of flavor and softness when eaten.

Led by Boyce Thompson Institute faculty member Jim Giovannoni, the discovery could also be a boon to commercial fruit producers, who are always looking for ways to extend their crops’ shelf-life without sacrificing flavor.

The research is described in a paper published in the Proceedings of the National Academy of Sciences, with authors from BTI, Cornell University, the U.S. Department of Agriculture (USDA) and Zhejiang University.

Fruits become softer as they ripen, making them susceptible to damage or rotting in transport from the field to the grocery store. Farmers currently extend shelf-life by harvesting fruits before they are ripe and controlling temperature and other environmental factors during transport. But these methods delay the whole ripening process, resulting in tomatoes and other fruits that are firm but flavorless.

The study delved into the genome of the tomato (Solanum lycopersicum) to look for genes involved in fruit softening but not fruit ripening. The team identified a transcription factor, S. lycopersicum lateral organ boundaries (SlLOB1), that regulated a broad array of cell wall-related genes and fruit-softening processes.

“Until now, nearly all of the transcription factors my lab has identified in tomato are involved in global control of ripening,” said Giovannoni, who is also a plant molecular biologist at the USDA-ARS Robert W. Holley Center and an adjunct professor in Cornell’s School of Integrative Plant Science. “SlLOB1 is interesting because it primarily regulates genes involved in cell wall softening and other textural changes of the fruit.”

When an idea gels

Previous work by Giovannoni’s group found that many transcription factors related to tomato ripening were initially expressed in the fruit’s locule – the gel-like tissue surrounding the seeds.

“Most fruit biologists discard the locular gel because it contains the seeds, which are ‘embryonic plants’ distinct from the fruit itself,” he said. “But the first indications of ripening occur in the locule, even before the fruit begins to change color or produce ethylene that helps it ripen. My group has been looking more closely at the locule over the last few years.”

For this reason, the team searched a tomato gene expression database for transcription factors that were highly expressed in the locule. They also looked for genes with elevated expression in the pericarp – the outer wall of the fruit – on the premise that it was likely to express softening-specific transcription factors. In both tissues, high levels of SlLOB1 coincided with ripening.

In live tomato plants, the team found that inhibiting expression of SlLOB1 resulted in delayed softening and firmer fruit, whereas overexpression of the gene accelerated the softening process.

Importantly, the team showed that inhibiting SlLOB1 expression had no effect on the ripening process: the tomatoes ripened in their normal timeframes. Fruit levels of sugars and acids were unaltered, suggesting that “from a flavor perspective, the fruits were likely unchanged,” said Giovannoni, though he acknowledged the study did not include taste tests. “What did change is the texture of the fruits; they remained firmer longer and softened later.”

He added: “If we can find SlLOB1 gene variants that delay softening, breeders could introduce those into commercial varieties to produce high-quality, good-tasting tomatoes that don’t become too soft before the consumer gets them home.”

“These tomatoes also have an increased nutritional quality because these pigments are antioxidants and your body converts beta-carotene to vitamin A,” Giovannoni said.

In addition to studying the genetic diversity of SlLOB1 across tomato varieties, Giovannoni’s group is working to introduce SlLOB1 and other genes into heirloom tomato varieties, which are prized for their quality and flavor but unsuitable for commercial production because of poor shelf-lives.

More broadly, Giovannoni’s group continues to investigate how all of the genetic components that regulate tomato ripening work together, including whether the seeds themselves are involved in the ripening process.

Opened in 1924, Boyce Thompson Institute is a premier life sciences research institution located in Ithaca, New York. BTI scientists conduct investigations into fundamental plant and life sciences research with the goals of increasing food security, improving environmental sustainability in agriculture, and making basic discoveries that will enhance human health. Throughout this work, BTI is committed to inspiring and educating students and to providing advanced training for the next generation of scientists. BTI is an independent nonprofit research institute that is also affiliated with Cornell University. For more information, please visit BTIscience.org.