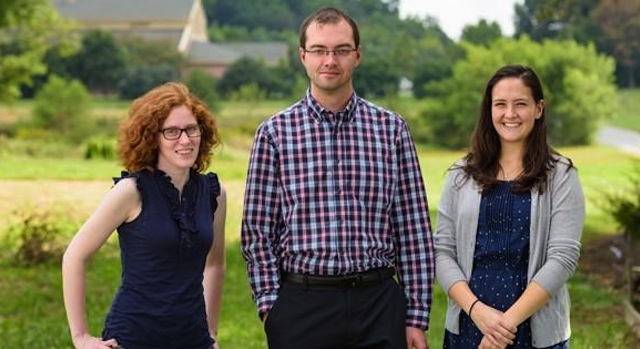 This is Ryan Arsenault (center), assistant professor of Animal and Food Sciences, with members of his research team Casey Johnson (left) and Bridget Aylward (right). (Evan Krape/ University of Delaware)

NEWARK, Del. — Researchers at the University of Delaware are looking into what causes that gut feeling in livestock animals such as cows and chickens.

Ryan Arsenault, assistant professor in the Department of Animal and Food Sciences in UD’s College of Agriculture and Natural Resources (CANR), arrived at UD in 2015 and since that time, he has worked to set up a lab looking specifically at the gut health of production livestock animals.

Arsenault said that gut health is a big topic in agriculture as many researchers are looking for alternatives to antibiotics which are almost all focused on the gut.

“We can’t use antibiotics like we used to in food animals,” said Arsenault. “Antibiotics have been used in animal agriculture to keep animals disease free and grow larger. In Europe, it’s totally gone, has been for years and years, and it’s getting pulled more and more from the American market so things like probiotics, pre-biotics, post-biotics, feed additives and feed enzymes, everyone’s looking at those as this silver bullet to solve the antibiotic alternative issue.”

Many of his research projects are funded by industry and look at mode of action and mechanisms for antibiotic alternatives such as yeast cell wall extracts, feed enzymes and feed modifiers.

The trend towards no-antibiotics basically boils down to two main points: the concerns regarding antibiotic resistance that bacteria develop and the negative perception consumers have with regards to the use of antibiotics in animals.

Arsenault said that the gut is important to understand because it’s the center of animal production.

“You need an efficient gut because that’s where all the nutrients are absorbed. You’re not going to have a growing animal without a functioning healthy gut and it’s also the site of entry for a lot of disease causing pathogens,” said Arsenault. “It’s linked to pretty much every other system. For example, the second most innervated organ in the body besides the brain is the gut.”

There is also a huge immune component as more than 50 percent of the immune system is found in the gut.

“The gut is sort of this nexus of everything,” said Arsenault. “It’s basically your gut microbiota — the resident commensal bacteria in your gut — are a big part of being healthy. If you have the ‘good’ bacteria in your gut, you’re more likely to be resistant to infections, your gut’s functioning more efficiently, you can maintain a healthier weight. Diseases like Crohn’s Disease or Ulcerative colitis are, people think, predominantly microbiota related.”

For instance, a lot of allergies and autoimmune diseases are linked to how one acquires a microbiome in infancy.

Arsenault said that his lab is interested in looking into how chickens or cows acquire a healthy or unhealthy microbiome and what signals this is providing to the host animal, which feeds into the probiotics question of what the animals should be fed in order to give them a healthy microbiota so their immune system is optimum and they’re absorbing the optimum nutrients.

Focusing on the gut is a trend in human health as well, as probiotics have taken off in popularity and the work being done in Arsenault’s lab ties into the One Health concept, the idea that the health of people is connected to the health of animals and the environment. The most common type of zoonotic disease — diseases that can be passed from animals to humans–are classified as zoonotic gastrointestinal diseases, this includes Salmonella, E.coliand Campylobacter.

For their presentations, Johnson and Aylward both focused on issues related to the gut.

Johnson looked at feed additives as alternatives to antibiotics and how they respond with necrotic enteritis, or inflammatory dead gut disease, in chickens which is a huge problem facing the Delmarva poultry industry due to antibiotic feed restrictions.

Because yeast is a fungus and not a bacteria, they initiate and bind to different receptors in the gut and do different things to the immune system than bacteria.

Aylward’s poster presentation in Banff looked at pattern recognition receptors, which are receptors in the immune system that recognize a specific universal microbe motif such as a set of nucleic acids in a form only found in bacteria, with regards to chicken macrophage cell lines.

A macrophage is a large cell found in stationary form in the tissues or as a mobile white blood cell, especially at sites of infection.

The macrophages were treated with butyrate — considered a post-biotic — and forskolin — a plant extract that people use as a weight loss supplement.

Aylward worked on the kinome array analysis of how signaling in the cells changed after administration of these different feed additives.

Her presentation in Dublin looked at eight random dairy cows that were free of pathogens to establish the baseline normal immune cell signaling in the gut of those cows.

In addition to his research on gut health, Arsenault is also on the organizing board of the annual Symposium on Gut Health in Production of Food Animals, an international conference on all aspects of gut health for all food animal species. He has been invited to speak on the topic of gut health in Brazil, Spain, Canada and the U.S. and co-edited an e-book on gut health research.

The Department of Animal and Food Sciences also has Amy Biddle, assistant professor of animal and food sciences, who co-teaches a gut microbiome microbial and host perspectives class with Arsenault.

Biddle’s work includes the Equine Gut Microbiome project in which her lab is tackling many of the fundamental questions behind the role of bacteria in the horse gut in health and disease.

—University of Delaware
via EurekAlert!

Heat-tolerant broccoli for the future