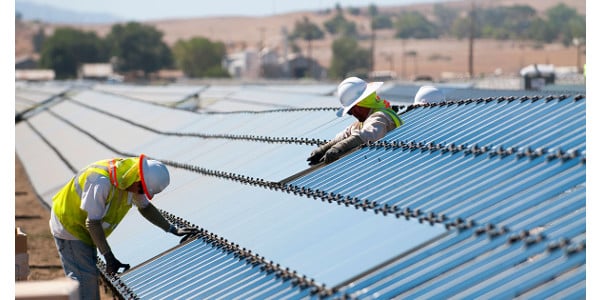 The U.S. Department of Energy has funded a team of CSU and other researchers to focus on a classic bottleneck that has stymied the widespread introduction of cadmium telluride as a solar material. (Photo credit: First Solar)

FORT COLLINS, Colo. — Fifty years ago, solar power was rare, expensive and specialized – barely a blip on the energy landscape. Today, rooftop and commercial solar markets are exploding, generating 2.5% of all electricity in the U.S. and fueled by the urgency of climate change.

For many years, Colorado State University physicists and engineers have worked to push the boundaries of solar technology, focusing on a cutting-edge photovoltaic material called cadmium telluride that’s currently in about 5% of the world’s solar panels. In contrast to traditional crystalline silicon, cadmium telluride solar cells are faster and take less energy to make, and today boast a record light-to-energy efficiency of 22%, held by First Solar, a longtime collaborator with CSU.

But before cadmium telluride solar cells can corner the market, they require further improvement in their performance. The U.S. Department of Energy has funded a team of CSU and other researchers to focus on a classic bottleneck that has stymied the widespread introduction of cadmium telluride as a solar material.

Led by Jim Sites, professor in the Department of Physics, along with longtime collaborator professor W.S. Sampath in the Department of Mechanical Engineering, they are tackling efficiency problems associated with one specific layer of the cadmium-telluride solar cell – the last layer known as the back contact.

Cadmium telluride solar cells consist of several very thin – only several microns thick – layers of different materials that convert light to energy by working together at their interfaces. Over the years, the CSU team, in collaboration with the CSU-based Next Generation Photovoltaic Center, has made major strides in improving various layers of the cell, including the light-absorbing layers and the buffer layer, made of magnesium zinc oxide.

The back contact is the layer furthest from the light source, and scientists have been unable to blend this layer seamlessly into the cell, due to the structures on either side not matching up. 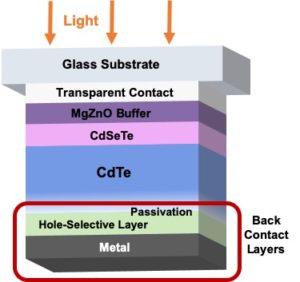 “This is clearly the bottleneck, and where the attention needs to go,” Sites says. He and Sampath are collaborating on the DOE project with experts from University of Toledo, First Solar, National Renewable Energy Laboratory, and University of Illinois at Chicago.

The team’s objective is to develop a high-performance, manufacturable back contact for cadmium telluride solar cells that could be easily transferrable into current manufacturing protocols. The work will build on the different strengths of each partner, bringing together experts in making, manufacturing and characterizing solar cells. They think they can achieve a 25% light-to-energy efficiency with an improved back contact architecture.

Sampath remarked that over his career, solar power has evolved from an obscure, expensive energy source to one whose cost structure has dipped below coal-powered sources.

“When we were originally starting out, there were papers written that said you couldn’t produce the amount of energy that went into making the panel itself, ” said Sampath, who started researching photovoltaic energy in the 1980s. Now, solar generates 500 gigawatts of power across the U.S., 25 gigawatts of which are produced from cadmium telluride panels.