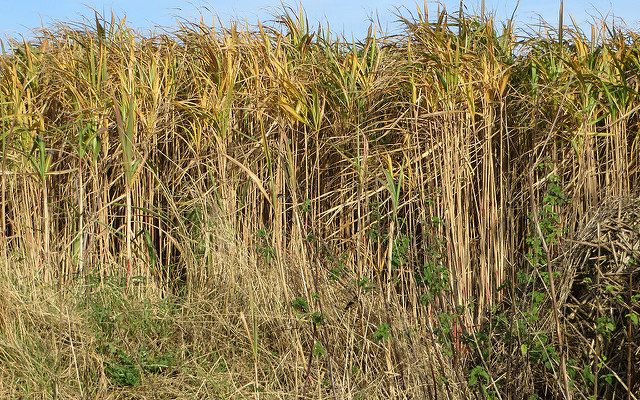 A large collection of Miscanthus sacchariflorus from eastern Russia could be used to increase cold hardiness of miscanthus grown for biomass in the United States. (David Wright via Flickr)

URBANA, Ill. — Winters in eastern Russia are intensely cold, with air temperatures regularly reaching -30 degrees Fahrenheit in some locations. It is a seemingly inhospitable climate, but native plants have found ways to thrive there. University of Illinois plant geneticist Erik Sacks suspected one of these plants may hold the key to breeding cold-tolerant food and biomass crops. To find out, the modern-day botanical explorer set off across eastern Russia with colleagues from the N. I. Vavilov All-Russian Institute of Plant Genetic Resources (VIR) to collect specimens of the perennial grass Miscanthus sacchariflorus.

“Miscanthus is part of a tribe of grasses, the Andropogoneae, that includes sorghum, sugarcane, and corn,” Sacks explains. “Because it is found so far north, this population of Miscanthus sacchariflorus is likely the most cold-hardy of that group. If we want to improve cold hardiness in this very important group of plants, this is going to be best population to study.”

Sacks and his colleagues collected miscanthus from 47 locations across eastern Russia, including at least one location where Sacks wasn’t expecting to find it; in that case, he used his bare hands to pull it from the ground. Live rhizome fragments were sent back to U of I to be genetically analyzed and to USDA’s National Plant Germplasm System to be maintained and distributed to scientists worldwide for use in breeding and research. Samples were also provided to the VIR genebank.

While in the field, Sacks’ team also measured traits that can be used to predict biomass production: height, number of stems, and stem diameter. When plant geneticist and the report’s lead author Lindsay Clark analyzed the plant material at U of I, she found several genetic markers associated with the traits measured in the field.

“Normally, breeders have to grow up plants from these collections and evaluate them in a replicated field trial,” Sacks says. “That’s very expensive and takes a lot of time. In the future when people go collecting, if there are heritable traits of value that can be measured quickly in the field, our results suggest it may be worthwhile to do so. It may not be as perfect as a replicated field trial in multiple sites, but it gives you a place to start.”

The analysis also showed that plants in the collection were genetically diverse, a fact that could potentially be exploited by breeders to express desirable traits in new miscanthus varieties or to add greater cold hardiness to its relatives, sugarcane and maize.

Furthermore, most of the plants were diploid—with each cell containing two copies of each chromosome—but 2 percent were tetraploid, with four copies. The most widely grown miscanthus variety in the United States, M. × giganteus, is a sterile hybrid derived from tetraploid M. sacchariflorus and diploid M. sinensis.

“We have this one genotype of M. × giganteus that’s grown for biomass right now. When we have cold winters like we had at the beginning of 2014 here in Illinois, it doesn’t do well. That’s because it’s from a subtropical area in Japan,” Clark explains.

“If we used the tetraploids from this collection to make new sterile M. × giganteus varieties, they would have a lot more cold hardiness than the current variety,” Sacks adds.

The research team has a lot more work to do before new miscanthus varieties are commercially available, but Sacks sees the exploration as a success. “Genetic diversity is the basis for all crop improvement, and germplasm collections play a key role. Without them, plant breeders can’t make great improvements in our crops in terms of yield, hardiness, and a variety of different abiotic and biotic stresses,” he says.

The article, “Ecological characteristics and in situ genetic associations for yield-component traits of wild Miscanthus from eastern Russia,” is published in the Annals of Botany. The study was supported by grants from the USDA-ARS National Plant Germplasm System’s Plant Exploration Program and the DOE Office of Biological and Environmental Research.