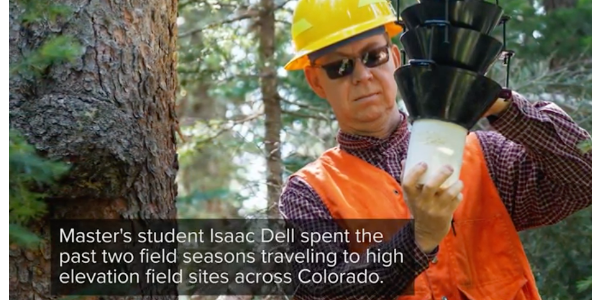 Study co-authors Seth Davis, assistant professor in CSU's Forest and Rangeland Stewardship department, and Isaac Dell, a graduate student at Montana State University, combined new beetle population and environmental data with climate projection models to see what could be in store in the future. (screenshot from video)

While insect disturbances naturally cycle through forests, the current spruce beetle epidemic affecting Colorado Engelmann spruce forests has been one of the largest on record. The Colorado State Forest Service estimates that since 1996, over 40 percent of the state’s high-elevation forests, encompassing an area larger than Delaware and Rhode Island combined, have already been affected by this latest cycle. According to the research team, this has resulted in a widespread die-off of trees valued for their contributions to clean water, recreation and wood products.

“Unfortunately, what we found suggests there is no best-case scenario,” said Davis, a specialist in plant and insect interactions. “Even if the climate increases by just one degree Celsius, we can expect spruce beetles to reproduce at higher rates than we’ve seen, with more time to invade trees.”

Their results indicate slightly warmer conditions could contribute to longer flight periods and more eruptive beetle populations, due to larger populations of fertile females. This combination could equate to more intense insect pressure on spruce forests.

Temperature plays a critical role in this species’ lifecycle by affecting the insect’s development, dispersal and flight patterns. At field sites that spanned the length of Colorado, Dell collected hourly temperature data along with more than 70,000 insects across the 2017 and 2018 growing seasons. With corresponding winter temperature data from the PRISM Climate Group at Oregon State University, some patterns emerged.

“It became apparent that beetles in 2018 were larger in size, after a warmer and drier winter than in the previous year, and that females were also more numerous,” said Dell, who recently graduated from CSU with a master’s degree in Forest Sciences.

By adding one degree Celsius to the daily temperature data set, climate projections showed a likely increase of 200 growing degree-days, which are used to predict plant and animal development, at these locations. This projection is based on the assumption that new global greenhouse gas production would be eliminated by 2020. According to the researchers, this could extend the beetle’s potential flight period from a few weeks to multiple months.

“For monitoring efforts, the best course of action for people is to place traps out earlier in the season,” added Dell. “We also recommend removing infested trees and traps in August, at the end of the beetle flight period.”

Davis said that while this scenario isn’t good news, he remains an optimist. By his estimates and through personal observation, up to 30 percent of beetle-infested, high-elevation forests have survived.

“It’s not always as bad as it looks when you’re driving by,” he said. “These interactions have been happening for thousands of years, and life, whether it’s a beetle, a tree or a forest, seems to find a way.”

Unleash your inner cowboy or cowgirl at CSU Day
January 15, 2020