Home / New England / Maine / Imaging spectroscopy can predict water stress in wild blueberry fields
A new user experience is coming! We'll be asking you to login to your Morning Ag Clips account March 1st to access these new features.
We can't wait to share them with you! Read more here. 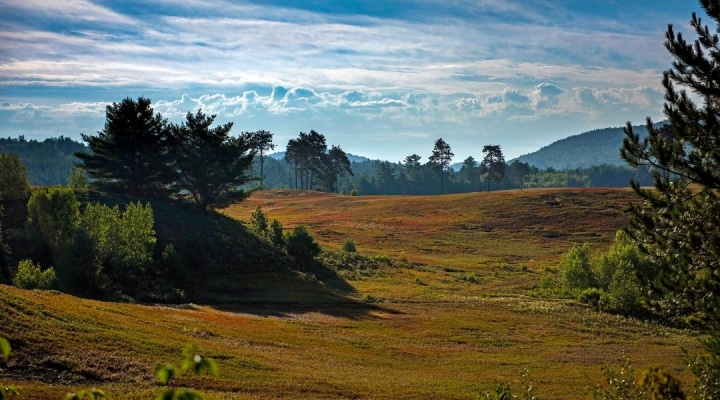 Wild blueberry field in 2018 at Sunkhaze Blueberry Farm Harvest. (Photo courtesy of the University of Maine)

ORONO, Maine — Imaging spectroscopy can help predict water stress in wild blueberry barrens, according to a University of Maine-led study.

The technology involves measuring the light reflected off of objects depicted in images captured by drones, satellites and other remote sensing technology to classify and gather pertinent information about the objects. According to researchers, it can precisely measure light across dozens, if not hundreds, of bands of colors. The reflectance spectra can depict nutrient levels, chlorophyll content and other indicators of health for various crops, according to researchers.

Scientists from UMaine, the Schoodic Institute and Wyman’s, one of the world’s largest purveyors of wild blueberries and the number one brand of frozen fruit in the country, found in their research that when incorporated into models, imaging spectroscopy can help predict whether wild blueberry fields will lack sufficient water for growing. Not only can the technology help inform growers as they evaluate irrigation routines and manage their water resources in a way that avoids damaging the crop, researchers say.

The team collected imaging spectroscopy data by deploying a drone equipped with a spectrometer for capturing visible and near-infrared light to photograph wild blueberry fields owned by Wyman’s in Debois, Maine. Researchers then processed the images to measure reflected light spectra from the plants for indications of chlorophyll levels and other properties that would help estimate their water potential, which, they say, is the primary force driving water flow and an indicator of water stress. At the same time, the group collected small branches with leaves from wild blueberry plants in the plots to assess their water potential and validate the spectra-based estimation. Pictures and samples were collected in the spring and summer of 2019 when the plants experienced peak bloom, green fruit and color break.

The data from both drone images and ground samples were incorporated into models, which they developed using machine learning and statistical analysis, to estimate water potential, and thereby predict water stress, of the plants in the barrens. Models from the ground sample data were used to help guide the development of and validate the model created with data from the images. The results of both sets of models were comparable, demonstrating that imaging spectroscopy can accurately predict water stress in wild blueberry barrens at different times of the growing season. With the efficacy of the technology confirmed, researchers say scientists can capitalize on the benefits of it, such as conducting repeated measurements on small objects like blueberry leaves with ease.

“We couple spectral data and areas of known water potential in wild blueberry fields through machine learning, creating a model to further predict areas that may be water stressed,” Chan says.

“This research provides key learnings to ensure the continued viability of wild blueberry crops for generations to come,” Hall says.

Warming and drought exacerbated by climate change have compounded their struggles in recent years, alongside freezing and pathogens. Researchers say as a result, there has been an increased need for predictive tools, like imaging spectroscopy and models that rely on it, for land conditions to inform mitigation strategies.

Nelson says the study was conducted in cooperation with his laboratory of ecological spectroscopy (lecospec) at the Schoodic Institute, which was financed by the Maine Economic Improvement Fund, Maine Space Grant Consortium, the National Aeronautics and Space Administration (NASA) and other University of Maine System funds. The research team used a software he developed with Chan and other students that allows drones and spectrometers to measure light across dozens or hundreds of more bands of color than an average camera, Nelson says.

“We envisioned and continue to promote this as a research and application tool to produce data and algorithms applied to questions and problems in forest, agricultural and marine sectors of Maine’s economy,” he says.