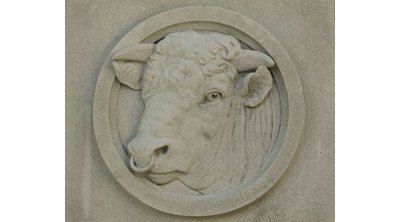 An example of one of the animal head medallions originally part of the University of Illinois Stock Pavilion when it was constructed in 1913. (Courtesy Photo)

URBANA, Ill. — This year’s 2019 Celebrate Food and Agriculture festivities brought a new audience to the University of Illinois Stock Pavilion. The primary use of the Stock Pavilion is instructional but since its construction in 1912, it’s been one of the most versatile spaces on campus. With some recent upgrades, it was an ideal setting for alumni and friends of the College of ACES to gather for this year’s pre-game celebration.

The generosity of the Baaders has funded updates to two teaching classrooms, the interior walls and seating surrounding the arena, the windows, the arena flooring and sound system, and the entrance and brick pavers on the building’s south side.

“My original intention was to fund the projects necessary to bring back the building’s original glory,” Rich Baader shared.

Most recently, Rich and Sue provided a photographic print of a New Deal mural from the Nashville, Ill., post office. The scene featuring several animals greets students and visitors to the 107 classroom.

In addition to the food and fellowship of the Celebrate Food and Agriculture event, this year’s celebration included the reveal of custom terra cotta animal head medallions.

When the University of Illinois Stock Pavilion was constructed in 1913, it featured 52 terra cotta animal head medallions on the exterior north wall. The designs featured 10 different species viewed as important to the livestock industry (two each of beef cattle, dairy cattle, horses, pigs, and sheep).

During Stock Pavilion renovations in the 1950s, the animal heads were removed and many were damaged. Intact medallions were stored on the South Farms, but many were lost over the decades.

Watch a video about the animal head medallions.

In 2018, five of the pieces were returned to the Department of Animal Sciences. Two other medallions were found in a campus storage room and in a local garden.

The John N. Chester Estate Endowment supported the recreation of the animal head medallions. The recovered original pieces remain on display in the Stock Pavilion.

The search continues for three of the original 10 medallion designs. Help the College of ACES find the Holstein and Jersey cows and Poland China pig. If you have any information about the missing medallions, contact the College of ACES Office of Advancement at 217-333-9355 or acesadvancement@illinois.edu.