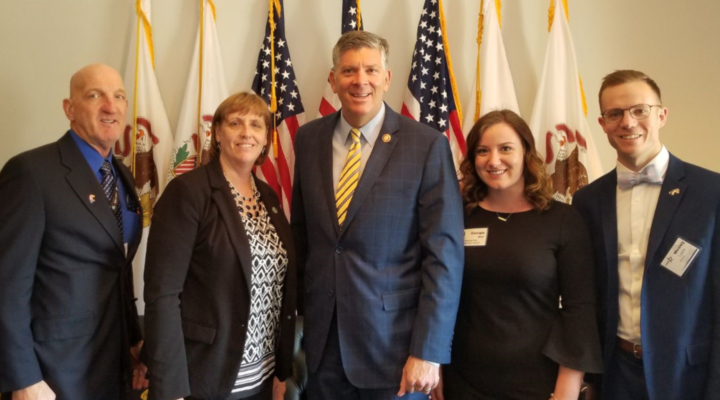 The IPPA Executive officer team, as well as members of the inaugural Future Leaders class, conducted 20 meetings, one with each member of the Illinois Congressional delegation. Those who attended are:

Key issues discussed during those meetings were: visa reform to support a viable workforce for U.S. agriculture, the importance of positive trade relations, keeping food affordable by allowing producers the opportunity to choose their production methods, and the potential impact of African Swine Fever to the United States.

This two-day event allows pork producers from Illinois the chance to join fellow producers from across the states in the United States Capitol. “It is imperative that our legislature hears our voice, straight from the farm” says Janssen, current IPPA President.

The U.S. pork industry is suffering from a serious labor shortage that undermines its commitment to the highest standards of animal care. Current visa programs widely used by pork producers are not effectively addressing the issue. Without visa reform to support a viable workforce for U.S. agriculture, animal welfare is jeopardized, and production costs will increase, leading to higher food prices for consumers.

Trade certainly matters to pig farmers in Illinois, since we are the fourth largest pork producing state in the country. While in D.C. our delegates asked members of Congress to urge the administration to act on these four export related matters:

A farmer’s ability to choose the production method that maximizes productivity, increases sustainability, reduces disease exposure and improves the health and welfare of his or her animals is critical to the pork industry’s success. This freedom has been jeopardized by recent state prohibitions on scientifically-sound production methods. These state mandates raise food costs while reducing consumer choices. Our industry is in favor of letting the farmer choose his or her production method.

Last, but certainly not least, on April 10, NPPC cancelled the 2019 World Pork Expo out of an abundance of caution as African swine fever (ASF) spreads in China and surrounding countries. The timing of that message while our pork leaders were on Capitol Hill further conveyed the angst of our farmers in the state, and beyond. Farmers urged congressional support for appropriations funding for 600 new Customs and Border Protection agriculture inspectors to further strengthen our defenses against ASF.

There are currently more than 2,000 farms producing 5.1 million total hogs in the state. In Illinois, the pork industry contributes over $1.8 billion to the state’s economy, generates more than $170 million in taxes and provides more than 21,900 jobs. Even as the number of farmers in our state continues to decrease, those remaining are producing more pork than ever before, for their families and yours.