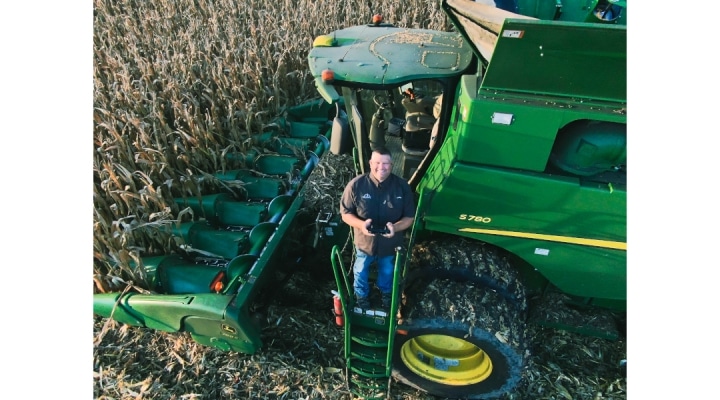 BLOOMINGTON, Ill. — The grand prize winner of the National Corn Growers Association (NCGA) 2021 photo contest is Todd Wachtel from Altamont, Ill. NCGA does this contest every spring and gives out 26 prizes with different categories.

IL Corn caught up with Todd to get to know a little bit about him. A fifth generation farmer from Altamont, Ill., Todd, his father and uncle grow corn and soy.

“I was lucky enough to get to farm for 20 years with my grandfather as well,” says Todd.

Growing up, he loved the farming lifestyle and has been happy to provide the same opportunity to his son.  While still loving the lifestyle, he currently enjoys seeing how quickly technology is changing all aspects of farming.

When we asked why he entered the NCGA photo contest, Todd said, “Every farmer loves driving the tractor and combine, but may also admit that after several long days it’s nice to have a distraction. My favorite distraction over the last several years has been farm photography. I used to carry a DSLR camera with me in the cab until I decided that these newer generation cell phones have amazing cameras and I really don’t need the big, clunky camera with me. With so many people becoming further removed from the farm, I’ve enjoyed using social media to share farming photos to keep people up-to-date with what’s going on. I’ve entered the contest the last three years and won a couple of first place prizes. Winning the Grand Prize was very exciting this year.”

Todd mentioned seeing one of his previous photo entries on a main stage at a NCGA conference and it feeling surreal.  He entered several photos this year and was surprised that the drone selfie was selected as a winner out of all of them. His personal favorite of the ones he sent was: Illinois had three other winners:

Kate Danner is also a part of the Illinois Corn Growers Association Board.  To create her photo, she made the image in her corn field via field prescriptions. The image was set to a zero population, so as she planted, the rows shut off to make the image. That image turned into a corn maze.

She set out to create this a-maze-ing thing because this was her first year expanding into flower production, and it was a creative way to tell the story behind the farm and flowers (Kate grows flowers, corn and soy). Throughout the maze, she had different facts of corn farming like 96% of farms are managed by families and there are over 6,000 end uses of corn like animal feed, fuel and exports.