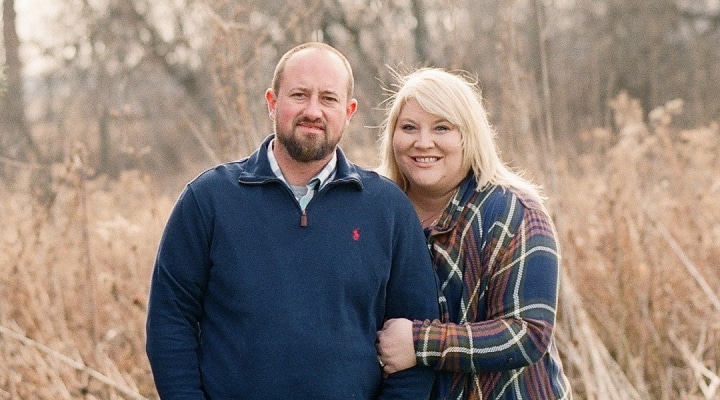 An Illinois farming couple from Galesburg, Ill., was recognized this week at the American Soybean Association (ASA) Awards Banquet at Commodity Classic in New Orleans, Louisiana. Matt and Liz Hulsizer were celebrated for their participation in the ASA Young Leaders Program. (Courtesy Photo)

Matt and Liz Hulsizer were celebrated for their participation in the ASA Young Leaders Program.

Sponsored by Corteva Agriscience, Young Leaders is a two-part education program that provides learning-in-action experiences for individuals and couples with an interest in agricultural leadership.

Matt and his brother-in-law, Andrew Bowman, combined farming operations after the loss of both their fathers, and now run a soybean, corn, and popcorn operation in Knox County. They work hard to implement new practices, while perfecting current ones, to become more efficient, profitable, and sustainable.

The Hulsizers have implemented strip till practices on their corn acreage, tested and now consistently use cover crops on acres that will be soybeans for the following spring, and handle their own soil sampling and tissue tests to monitor crop health data throughout the year. They also create their own prescription planting maps based on yield data from previous years, along with suggestions from seed input suppliers.

Off the farm, Liz works as a Lead Trust Officer at a local community bank and handles farm management for the Trust Department. On the farm, Liz manages the bookkeeping and bill paying. During harvest, Liz runs the combine and operates the tractor and field cultivator in the spring.

“It has been an honor and pleasure to be a part of the Young Leaders Program and represent Illinois soybean farmers. The knowledge gained, not only about farming practices, but also about us as young leaders and other state leaders a part of the program, was transformational,” said Matt.

“We are stronger leaders and growers thanks to our involvement in this program and look forward to applying this knowledge and sharing what we learned on our own family farm and in our rural community. We thank the Illinois Soybean Association, American Soybean Association and Corteva for not only investing in us, but in all the young leaders who hope to positively impact the agricultural community.”

The Illinois Soybean Association (ISA) checkoff and membership programs represent more than 43,000 soybean farmers in Illinois. The checkoff funds market development and utilization efforts while the membership program supports the government relations interests of Illinois soybean farmers at the local, state, and national level, through the Illinois Soybean Growers (ISG). ISA upholds the interests of Illinois soybean producers through promotion, advocacy, and education with the vision of becoming a market leader in sustainable soybean production and profitability. For more information, visit the websites www.ilsoy.org and www.ilsoygrowers.com.