Home / Illinois / Illinois Farmer Veteran Coalition launched
A new user experience is coming! We'll be asking you to login to your Morning Ag Clips account March 1st to access these new features.
We can't wait to share them with you! Read more here. 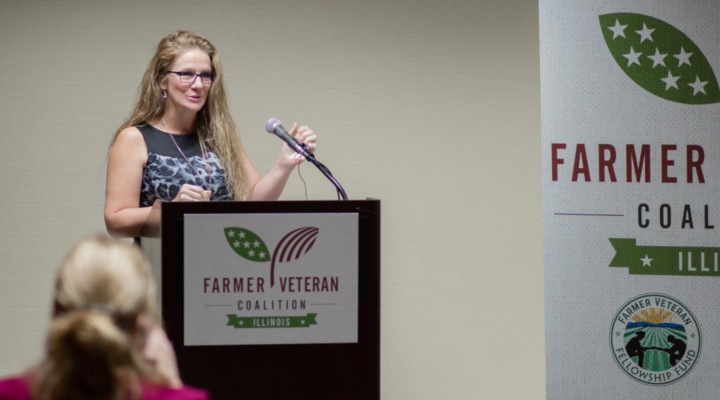 CHICAGO, Ill. — Retired Army Reserve Maj. Amy Hess sees the common values shared by farmers and individuals in the military. Both support a cause greater than self –- the food supply –- and daily dedication no matter the hardship or environment.

“This is a bond already created, the utmost commitment to a bigger-than-us purpose,” Hess told FarmWeek.

That farmer-veteran link took center stage Saturday with the launch of the Illinois Chapter of the Farmer Veteran Coalition during the Illinois Farm Bureau Annual Meeting in Chicago. This marks the 10th state chapter of the national organization, based in Davis, California.

The resources include information about programs the veterans may not be aware of, Hess noted. Matteson added the coalition also has a fellowship fund which has distributed more than $2.5 million in small grants of up to $5,000. Grants may be used to add a new process, build fences or to expand a farming operation.

“The (fellowship fund) emphasis is on practicality -– what will you spend to accomplish (a goal) and what will be the return. That is what attracted Farm Credit to support the coalition many years ago,” Matteson said.

Matteson and Hess encouraged farmer veterans to join the chapter. Matteson added that includes those who want to support other vets, but don’t anticipate needing resources.

“The support will come back tenfold,” said Hess, who recently bought her first 15 acres. “You may be a farmer in DeKalb County and I’m a farmer in Mercer County, but we support one another. Distance is not relevant.”

Matteson continued: “The Farmer Veteran Coalition provides a sense of community for the men and women who served in the military. It is important to join and be a part of the network.”

On the national level, the Farmer Veteran Coalition has a policy role in Washington, D.C. “The more members we have, the more heft we have speaking for farmer veterans,” Matteson said. As the coalition approaches the end of its 10th year, membership rolls number nearly 17,000.

“This is a huge opportunity to help veterans, agriculture and rural communities,” said Raghela Scavuzzo, IFB associate director of food systems development who serves as the state chapter secretary.

Matteson emphasized the Farmer Veteran Coalition is “aggressively ecumenical” with representatives from all types of agriculture, all sizes of farms, different farm organizations, and conventional and organic agriculture. “We insist on that broad representation,” he said. “Our goal is to help them be the best at whatever they want to be.”

As a new farmer whose “10-acre dream” came true, Hess plans a holistic farm with components that “synchronize with each other.” She wants to expand her honeybees, add specialty chicken breeds and meat goats, and grow a niche crop. As the founder and executive director of Adonai Community Support services, a nonprofit group that works with veterans, Hess realized she should work toward “my happy place,” one she tried to help other vets find.

“For me personally, it is going back to my roots,” Hess said.