Home / Illinois / Illinois Farm Bureau re-elects president, VP
A new user experience is coming! We'll be asking you to login to your Morning Ag Clips account March 1st to access these new features.
We can't wait to share them with you! Read more here. 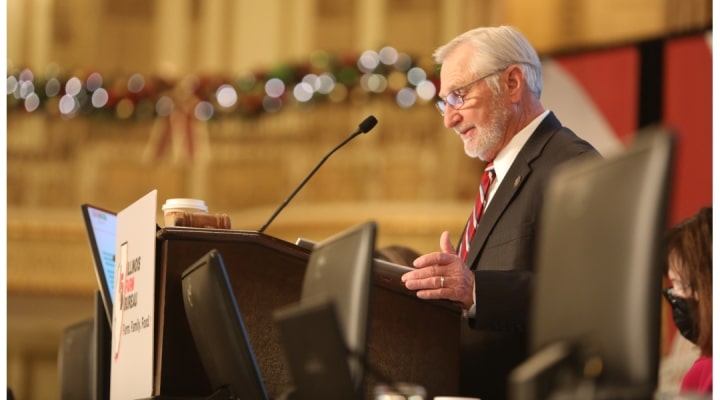 “It is both an honor and a privilege to have the opportunity to serve a final term as president of this great organization. It has been my pleasure to further our mission to improve the economic well-being of agriculture and enrich the quality of farm family life. I wholeheartedly commit that I will continue to do my utmost best to support and defend the policy set forth by the delegate body through our grassroots process. This work continues not only here in the state of Illinois, but in Washington, D.C. and across this country. I am looking forward to working alongside our tremendous board of directors, home office and county Farm Bureau staff and our members as we push forward on key agricultural issues over the next two years,” Guebert said.

Guebert has a bachelor’s degree in agriculture education, with a minor in animal science, from Southern Illinois University. Guebert, his wife, Nancy, and their son, Kyle, operate a corn, soybean and wheat farm in Randolph County.

“From the bottom of my heart, it is my privilege to serve as vice president of Illinois Farm Bureau,” Duncan said. “I do not take lightly your trust in me to help shepherd this organization forward and to uphold our policy. I never forget that it is my job to serve you, the member, and I look forward to going above and beyond as much as possible in the next two years. Illinois farmers have a great story to tell, and together we are backed by a strong organization that is dedicated to doing just that.”

Duncan is a graduate of Sauk Valley Community College and is an active member of Forreston Grove Presbyterian Church. He and his wife, Kelly, raise corn, soybeans, wheat, pigs and cattle on their farm near Polo; they have four children.