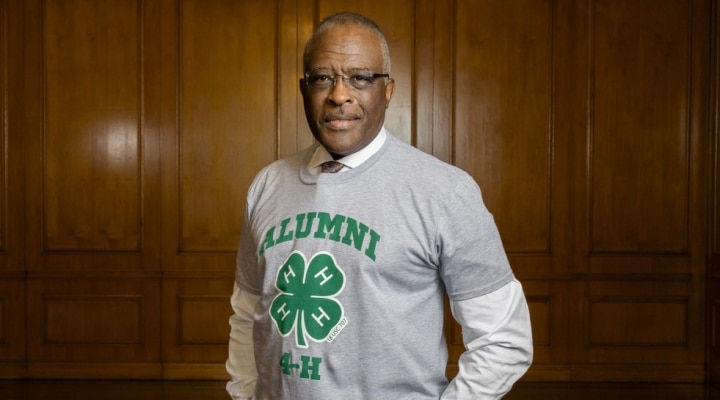 University of Illinois Chancellor Robert Jones was elected to the National 4-H Council Board of Trustees. (Courtesy Photo)

URBANA, Ill.  — University of Illinois Chancellor Robert Jones was recently elected to the National 4-H Council Board of Trustees. Jones joins celebrity chef and author Carla Hall as new trustees for the national youth development organization of which they are alums. Both share a passion for diversity in agriculture and food equity and will further support the organization’s diversity, equity, and inclusion efforts.

“It is no exaggeration to say that the first step in my career was joining my local 4-H club,” Jones says. “Those meetings were the first organized events in my life, outside of church or school, and they set me on a course that changed the trajectory of my life.”

Jones says he believes the 4-H mission is even more vital and critical today when limited access to childhood educational opportunities leads to unacceptable upper limits on a life and career.

“I found educational opportunities that opened up a world that I never knew existed,” Jones says. “4-H taught me to dream big, and it is my privilege to be able to pay that gift forward today,” added Jones.

Jones is an experienced and accomplished scientist and researcher, a member of the American Academy of Arts and Sciences, and a fellow of the American Society of Agronomy and the Crop Science Society of America. During his distinguished, 34-year career at Minnesota, Jones had administrative and budgetary responsibilities for the offices for public engagement, equity and diversity, and played a leadership role in establishing the nation’s first urban research and outreach engagement center which was designed to help find a solution to complex challenges in economically depressed urban communities. The center was named in Jones’ honor in 2015.

Celebrity chef, cookbook author, and Tennessee 4-H alumna, Carla Hall, was introduced to television audiences as a competitor on Bravo’s Top Chef and Top Chef: All Stars. She co-hosted ABC’s lifestyle series The Chew for over seven years and currently serves as a culinary contributor on Good Morning America.

In addition to her television appearances, Hall hosts a podcast on the Wondery Platform called Say Yes, with Carla Hall. Hall’s latest cookbook, Carla Hall’s Soul Food: Everyday and Celebration, received the NAACP Image Awards nomination. Hall’s passion for diversity in food culture, agriculture, and equity in food access is rooted in her philosophy that food connects us all.

“As a chef, I have an opportunity to share my passion for food and mindful cooking with the world,” says Hall. “I’m excited to continue my work with 4-H in this new role and join their efforts to empower all young people as they navigate the effects of the ongoing pandemic, digital divide, and widening opportunity gap.”

As trustees, both Hall and Jones will support National 4-H Council’s strategic priorities, which include growing investment and participation in Cooperative Extension’s 4-H program from six million to 10 million youth by 2025, as well as a collaboration with Historically Black Colleges and Universities.

“As passionate advocates for young people, agriculture, and promoting diversity, equity, and inclusion, both Dr. Jones and Ms. Hall will move us even closer to our goal of providing all children with the opportunities they deserve so they can reach their full potential,” says Jennifer Sirangelo, president and CEO of National 4-H Council. “Our new trustees’ expertise will help us to drive National 4-H Council’s new campaign, Opportunity4All, which aims to rally support for Cooperative Extension’s 4-H program and eliminate the opportunity gap that affects 55 million kids across America.”