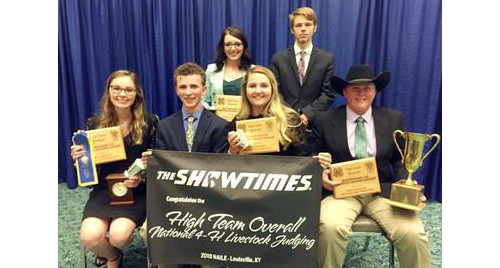 GALESBURG, Ill. — Five youth from across the state of Illinois have earned the opportunity to represent the United States at two international competitions at the end of June. The livestock judging team, coached by former Knox County 4-H’er Gracia Ramp, will be competing at the Royal Highland Show in Scotland as well as the Charleville Show in Ireland.

Team members include Mason Engnell of McDonough County, Nicole Haverback of Henry County, Jake Bohnsack from Rock Island County, Jenna Wheeler from Morgan County and Clay Sundberg from LaSalle County. The team secured their spot to represent the United States at the National Contest in Louisville, Ky., in November. Team member Mason Engnell was named the overall high individual of the contest.

At the contests abroad, the team will mainly judge beef cattle. Coach Gracia Ramp said of this opportunity, “The breeds and type of cattle will be much different than what we see in the U.S. While we hope to be competitive and do well, it is really more about the experience,” she said. “This is a really awesome opportunity for them to take their passion for livestock judging abroad.”

While abroad, the team will take a break from judging livestock and tour farms in both Ireland and Scotland. This will allow the team the chance to learn more about international agriculture. Members of the team leave mid-June for the contest and will arrive back in the United States at the beginning of July.

The Illinois 4-H livestock judging program teaches youth to identify breeds of livestock and helps them make decisions which improve their local herds. The annual state contest is held in June each year on the University of Illinois campus. Additional programs provided by University of Illinois Extension can be found at https://web.extension.illinois.edu/hkmw/.